The CIA Family Jewels They Didn’t Tell You

In 2007, the Agency released the “CIA Family Jewels,” touted as a “tell-all” regarding long time secrets the agency has held back from the public. However, did the family jewels release tell everything that the public should know?

What about that huge blanked out project…left for effect, just to make our foreign enemies wonder? What do the CIA family jewels tell us about what the CIA knew, or knows, about UFO’s and the alien contact? Ultimately, clues to answers regarding alien sightings and UFO alien experiences can be provided by what the government and the Air Force, in particular, actually knows regarding these events.

Unfortunately, when we examine CIA involvement and the involvement of other government agences in the field of UFO alien sights from the 1970s through the 1980s, we discover the same old names that were listed by Bill Moore in his famous “Aviary” list of alleged government “insiders” and non-government stooges.

For years, countless UFO investigators report that the majority of their involvement with these “insiders” involves a process where the alleged intelligence officer goes about extracting information from the researcher, not the other way around. According to my own recent experiences, this is most definitely the case.

However, the question remains, why and when did this former CIA officer meet with Doty, a person who’d been causing trouble by creating fabricated UFO reports since the 1970s or earlier? The answer to why may lie in the earlier story surrounding this fascinating and brilliant mind and personality.

One Story Left Out of the CIA Family Jewels

One of the best examples of a perfect mixture of information and disinformation is the book Remote Viewers: The Secret History of America’s Psychic Spies by Jim Schnabel. Excerpts from this book provide a bit of insight into the nature of Dr. Green’s mind during his early years at the CIA, in the early 1970s. In the book, Schnabel refers to Green as “Richard Kennett.” This was also during the time when Hal Puthoff and Ingo Swann were performing their early experiments at SRI (much more on this in future updates.) The issue to examine here is what refers to the state of mind of Dr. Green when he was first involved in the CIA’s interactions with Hal Puthoff and the early Psychic research.

According to information provided by Schnabel (keep in mind much of his information came from Kit himself), at one point Kit was asked to work with the Monroe Institute and the Army regarding “human use” implications related to psychic research. Allegedly, he declined due to the fact that he considered the altered states involved to be too dangerous for human testing to be considered ethical. When I asked Kit about this in 2008, he confirmed that as far as he could remember, this was essentially true. He advised the Army not to get involved.

With that said, there was an incident involving General Stubblebine that we’ll examine later which indicates that, apparently, the Army ignored Dr. Green’s recommendation.

The Mental State of Those Interested in Alien Sightings

Back to the discussion regarding mental state. According to Schnabel, in 1973, the young analysit, Kit Green, had an interest in the paranormal topics from day one. The exact wording used in the book was “eclectic interests.”

According to events described in this book, Kit wanted to tell the tale of his experiences with Livermore physicist, Don Kurtis, regarding an odd experience involving a “floating arm” appearing in the middle of a room in front of the physicist and his wife. Curtis told the story to Kit Green, who immeditely called Hal and Russ Targ at SRI to meet with him in Washington so he could relate the story to them. Schnabel’s description of that meeting is the best indication of the mental state of Kit Green and Hal Puthoff during the years when they were supposedly “pre-Doty.”

The story from the book reads as follows:

Within a few days, Puthoff and Targ arrived in Washington for a scheduled fund-raising tour of government offices. Kennett met them shortly after they had arrived at their hotel, and though it was close to midnight, he sat them down and told them the whole story, including the story of the floating arm.

“And so the goddamn arm –” said Kennett, winding up his story. “The thing was rotating, with this gray suit on, and it had a hook on it. It was a false arm. What do you think of that?”

And as Kennett pronounced the word that, there was a sharp, heavy pounding on the door to the hotel room, as if someone were intending to knock it down. Kennett had a mischievous streak. Was he playing some kind of practical joke here? Puthoff and Targ didn’t think so. The pounding was so loud, it was frightening. After a moment, Targ went over to the window and hid behind the curtains. Puthoff stood inside the bathroom. Kennett went over to the door and opened it.

Standing in the doorway was a man who at first glance was remarkable only by his unremarkableness. He was nondescript and unthreatening, somewhere in middle age. He walked past Kennett very slowly, with a stiff gait, to the middle of the room, between the two beds. He turned around, and said in an oddly stilted voice, “Oh! I guess…I must…be…in…the wrong…room.”

And with that he walked out, slowly, stiffly, giving all of them time to see that one sleeve of his gray suit, pinned to his side, was empty.

If we are to believe this story, then what is revealed to the discerning readers who are reading this blog closely, is a fascinating aspect of the intricate psychology of a brilliant mind, trapped by the tedious obligations of a low-ranking CIA paper-pushing analyst. 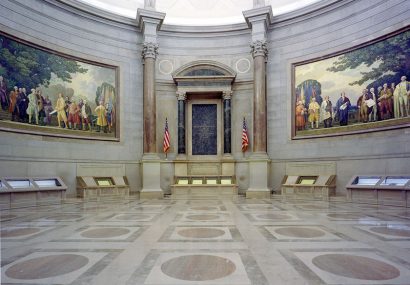 Majestic 12 Debunked by the National Archives   0

In 1988, the FBI received an anonymous memo with the claim that it was a highly classified document. Obviously, someone was looking to attract the attention of the Justice Department. [...]

Gordon Novel JFK and the Making of a Myth   0