Where Did the Term Black Friday Come From?

On this exciting day of the year, I would like to take a moment to discuss where the term Black Friday came from. While the goal of Top Secret Writers is to reveal the truth about alleged secret and deep black projects and conspiracies, occasionally you’ll find the occasional insider information about factoids not many people know.

As shoppers, still somewhat overloaded and stuffed from their Thanskgiving feast, head out on Black Friday (are you one of them?), I’d like to take a closer examination of where did the term Black Friday come from.

Most TopSecretWriters readers are familiar with terms like “Black Projects” or “Black Ops,” but what does “Black Friday” mean and are there any deeper, darker connotations to the phrase?

In this brief post on the eve of this particular Black Friday, I’m going to answer that for TopSecretWriters readers…and at the end of the post I’m going to share a “Top Secret” just for you – a link to a website where you can find Black Friday ads before anyone else – so read on!


Where Did Black Friday Come From?

While the term sounds ominous, the history of Black Friday is anything but. In the very early days of mass production, where distributors and retailers sold goods to citizens for currency, accounting records of those sales were always kept by hand, in ink.

Once colored ink became available, accountants used red ink to indicate financial loss, and black ink to show financial profit. In fact, even as the financial world has evolved into one of electronic records and spreadsheets, the red and black indicator colors are still used – in fact the color scheme is built right into Microsoft Excel.

As the Western world gravitated toward massive commercialism (spending) at the end of the year, the historical trend formed where most shoppers went out en masse on the day after Thanksgiving (always a Friday) to start their Christmas shopping and to start enjoying the festive Christmas season as early as possible. Due to that trend, retailers began using specific marketing techniques to get those early-bird shoppers to their stores first, like opening stores extremely early in the morning and offering rock-bottom deals to drive the crowds into their stores.

These gimmicks use “loss leaders” – sales where the retailers eat a loss – simply to get the crowds rolling in early. Typically the influx continues throughout the day even after the sale prices slide back to normal, and the later crowd more than pays for the early losses before 5 A.M. Starting around the 1970s, and more specifically when Bonnie Taylor-Black (American Dialect Society) made mention of the term (from Wikipedia):

JANUARY 1966 — “Black Friday” is the name which the Philadelphia Police Department has given to the Friday following Thanksgiving Day. It is not a term of endearment to them. “Black Friday” officially opens the Christmas shopping season in center city, and it usually brings massive traffic jams and over-crowded sidewalks as the downtown stores are mobbed from opening to closing.[11]

By 1975, retailers were using the term “Black Friday” within the industry to describe the day, because it was the one day of the year when they could count on the net income column in their records to remain colored in black – reflecting the tremendous profit of that one day compared to the rest of the year. For some reason, the term has grown significantly in popularity since 2000 – most likely because of the popularity of the early-morning jaw-dropping deals, and stores opening their doors at ridiculously early hours for shoppers to take advantage of those amazing savings.

Now, as a special deal of my own for TopSecretWriters readers, I’d like to offer a secret resource so that you can locate the absolute best bargains in your area on Black Friday. Okay, it’s a public website so it’s not exactly “secret,” but hopefully few other shoppers know about it so you can be one of the few insiders.

Over at MakeUseOf, one of the large tech blogs that I write for, Dave Drager published a great article titled “5 Sites To Find Black Friday & Cyber Monday Sale Listings.” One particular resource that he shares is a significant one – an obscurely named website called BFAds.net. 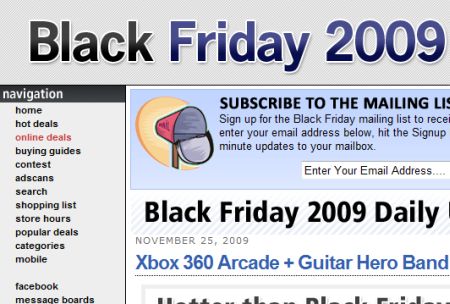 Here, you’ll find secret inside tips to the deals before everyone else can get them. The members who have inside information will submit the information to the site owners who then post them. Keep an eye on this site for the best Black Friday deals every year – and plan out your shopping binge accordingly!Originally published on TopSecretWriters.com
Facebook 0 Twitter 0 Pinterest 0 Google 0 LinkedIn 0