A new and booming industry in the field of private investigation is companies that sell and process covert DNA test kits. If you’ve never heard of these, you may be surprised to learn that the police are not the only ones who can send biological samples out “to the lab” for DNA test. Now, private companies offer you the ability to send in whatever evidence you can collect in order to prove things like:

Just considering the possibilities is eye opening. Now, anyone can covertly collect samples of someone’s hair follicles, nails or even undergarments in order to send off for testing. The companies offer covert DNA test kits you can use to collect your samples to ship off to the lab.

The process is simple – you collect a sample of the item for testing, collect a second sample of the test subject, and send it in to the lab to determine a match. Or, in the case of maternity testing, a sample from the child and a sample from the parent will do the trick. The following are some of the leading companies that are now offering this DNA test service to private citizens.

The process of becoming a private CSI agent is eerily simple. One particular website, The Genetic Testing Laboratories (GTL) lists a total of seventeen sample mediums that they will accept for testing, with varying degrees of success rates depending on which one you choose.

Obviously the most difficult to gather, like cheek swabs, offer the highest success (99 percent), while the easiest to collect such as hats or cigarette butts offer much lower rates, from 50 to 65 percent. Some of the listed suggested samples are surprising, and some of the success rates reflect the amazing accuracy of DNA testing today. Some of the more interesting examples:

What’s clear from the list is that it’s now ridiculously simple to check someone’s DNA against questions of paternity, doubts about infidelity, concerns about crimes committed…all it now takes is the covert DNA test kit, a little bit of ingenuity about how to collect the best samples, and about a hundred bucks.

Where to Send Your Test Kits

There are a number of companies that are now competing for your DNA testing business. Most of them concentrate on the two most popular requested tests – paternity or infidelity testing. However, I’m certain if you have other DNA testing needs, they would be more than willing to entertain them. The real goal of the lab is to match DNA, so the purpose of the match is very likely not really a concern for them.

True-Test is probably the most popular DNA testing company, as it was featured on the Maury show. The company tests DNA, but their most popular product is the home test kit where you can use special enzyme liquids to positively identify certain types of stains. 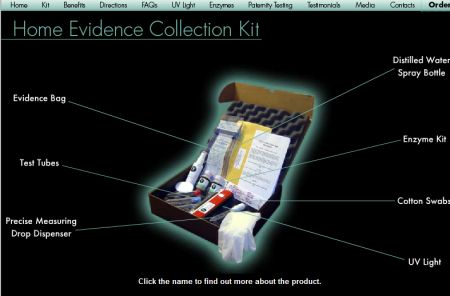 This is probably the best approach, because the cost is just under $200, but the value of the kit is the fact that you can use it multiple times, rather than just get one test. Of course if you’re sending in samples for positive DNA matching, you’ll have to pay more, but you’ll still get to keep the entire kit for future use.

DNA Plus is a company that comes across as someone more respectable, and the tests they offer are more varied than just infidelity testing. There’s an expensive court-admissible test that’s just under $400, but they do offer the usual tests that are about $100 for your peace of mind.

The nice thing about this DNA testing company is that the DNA collection kit is completely free!

The Genetic Testing Laboratories is another very respectable company that offers a very wide range of testing options for DNA testing and also will send you a test kit just like the others.

This does appear as yet another very respectable lab. They even offer a test you can order on your own DNA that provides you with a DNA predisposition for 25 medical conditions! I’m not sure I’d want to know – but if you’re curious whether you’re at a higher risk for heart attack, cancer or other diseases, this is an easy way to find out!

If you do decide to order a DNA test kit, just make sure it’s legal in your area (contact the police and ask). The UK recently banned covert DNA testing as an invasion of privacy, so it’s a good idea to check with local authorities first.

Would you ever consider using a private DNA testing company? Share your opinion in the comments section below!