Is it OK to Publicize Secret Security Clearance? 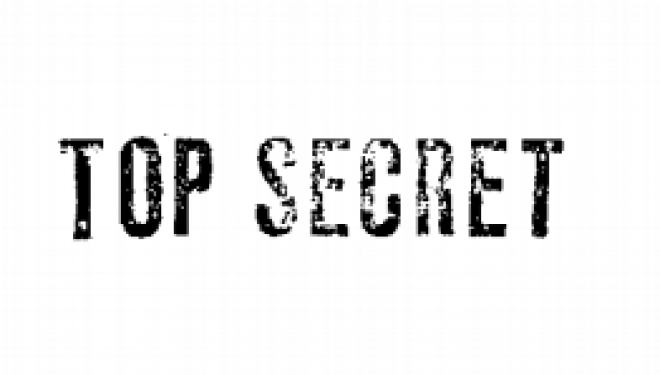 There are many thousands of government and industry professionals who maintain some sort of top secret clearance to work for the government or on government and military contracts. Is it ever okay for those employees or job hunters to publicize secret security clearance status that they may have?

I find this concept fascinating, because while many scammers often try to use a top secret clearance as proof that they have inside knowledge about the government’s business, other people are very blase and aloof about their clearance – listing it as just another item on their resume like any other.

However, what these individuals may not realize is that the choice to publicize secret security clearance could be a dangerous decision. I have a some public examples I’d like to show, but since these may be taken down shortly after being revealed, I’ll avoid linking to them.

One of the first examples examples I discovered was that of a former Lockheed PMP Top Secret DOD expert on LinkedIn. His name is John Grinold and he is a Senior Nuclear Engineer based out of Switzerland. His focus was performing “design risk analysis” for Lockheed Martin Space Systems.

Considering all of the conspiracy theories out there regarding Lockheed’s Top Secret DOD construction contracts and other urban legends, it seems inconceivable that someone would post their Top Secret access to such projects right on the public Internet. All it takes is one nutcase gaining access to your contact information, and you can just imagine the sort of madness that would invade one’s inbox. 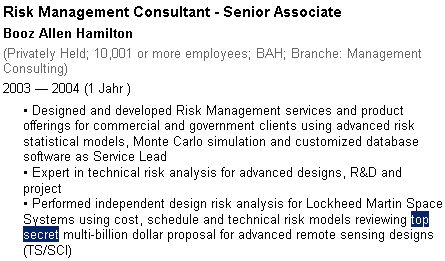 
It wouldn’t take very much work for a savvy foreign intelligence agent to dig through this person’s details, discover contact information and approach the employee with a tempting offer to extract that top secret information. Because of this vulnerability, industry and business networking sites like LinkedIn present a significant security vulnerability for U.S. intelligence organizations.

If there isn’t a policy in place within the Office of the Director of National Intelligence for all intelligence agencies regarding whether or not employees and contractors can publicize secret security clearance – then there should be.

Here is another case, a man named Doug Evans, a PMP Top Secret DOD expert (Project Manager) based out of Washington DC. Note here as he proceeds to publicize secret security clearance.

Again, this information as well as a full breakdown of his previous work history, including work with Lockheed Martin and with the Army 20th Special Forces Group, are all stored in his LinkedIn profile and configured as “public.”

Here is another example … 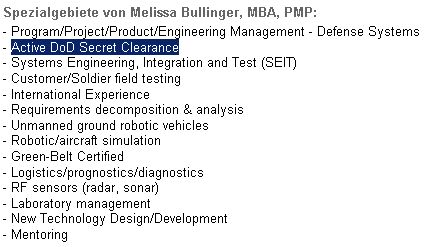 In this example, Melissa Bullinger, another project manager, decides to advertise the fact that she has “Active DoD Secret Clearance.” Obviously, having only Secret rather than Top Secret doesn’t make her privy to information of National Security sensitivities, the tendency to advertise one’s security clearance online is an activity that folks throughout the Intelligence communities should carefully consider.

Just searching Google for LinkedIn profiles turns up many dozens of such profiles that advertise their security clearance alongside other resume qualifications. While a security clearance is obviously a positive attribute to have when you’re job hunting in particular industries, should it be something that you advertise to the entire world?

There are two groups of folks who would find such information very useful. The first – Scammers who would like to make use of any very real project that you might have worked on in order to convince people that a fabricated project (using similar or identical code words) exists. The second and more dangerous – foreign agents who may approach and attempt to coerce individuals with security clearances into sharing sensitive information with a foreign intelligence service. 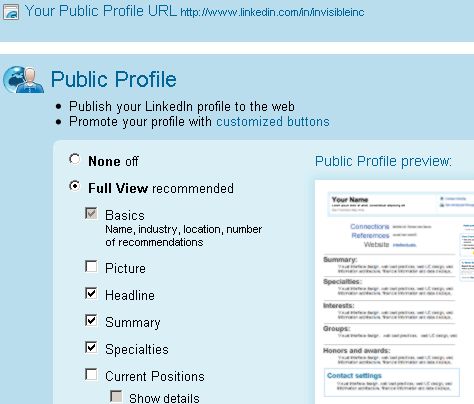 Make sure current positions, past positions and even Education are all unselected.

Every government or military employee or contractor should keep their identification private, or at least opt not to publicize secret security clearance that you might have on your record. While a potential employer may have an interest in your clearances, that doesn’t justify broadcasting it to the world and marketing yourself to foreign intelligence agents as someone who may hold valuable classified information.