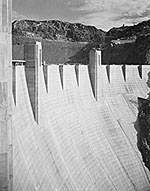 Hoover Dam is the result of the largest and most successful public works project ever to be completed on American soil. This single project helped to combat the Great Depression by providing thousands of jobs to impoverished Americans.

When it was completed, Hoover Dam provided huge amounts of electricity to southern California and created the largest man-made reservoir; Lake Meade. This dam became a symbol of American ingenuity and its physical prowess.

Unfortunately, throughout World War II, it also became a target.

Documents housed at the National Archives and Records Administration describe, in great detail, the government’s effort to protect the Hoover Dam from sabotage by the Germans during World War II.

Industries in southern California, especially the nation’s military defense industries, relied heavily upon the power stations at the dam. Without Hoover Dam, such large-scale defense plants could not exist in the area. When the Dam was completed, American leaders realized the importance of the structure, as did Hitler.

The documents chronicle several cases of suspicious activity, along with even additional cases of attempted sabotage. The cases ranged from suspicious German “tourists” excessively photographing the dam to late-night shots fired at park rangers to bombing attempts.

Doomed to Be Sabotaged

A letter from the War Department to dam officials actually warned, “Unless quick action is taken, some terminal transformer station somewhere near Boulder Dam and another station in Los Angeles are doomed also to be sabotaged.”

Each case, from the simple suspicions to the discoveries of complex plots, caused the government to lock down the dam and provide stricter and stricter security measures. All the while, assuring the American public that everything was okay, the dam was safe, and to disregard any rumors of sabotage attempts.