How World War II was eventually won has many versions, depending who you listen to. If you listen to the US, they won it all by themselves, without any help from any other countries (and slanderous Hollywood movies such as U-571 reinforce this shocking myth).

Then again, some Brits would have you believe we beat Jerry with only some good old British stiff upper-lip, a good spanking with a cricket bat and an endless amount of tea.

But I firmly believe that the war would have stretched much longer than 6 years, and the Allied invasion of France would have been a bloodbath, if it hadn’t been for a small secret committee inside British Military Intelligence (MI5), called the XX Committee (Double-Cross).

Highly classified for years after 1945, the work of the Twenty Committee (20 – XX – Double Cross – get it?) was eventually revealed to show how many military lives they ended up saving by ending the war when they did.

Before the war began in 1939, and during the first months of the war, the head of the Abwehr (German Military Intelligence) Admiral Wilhelm Canaris, sent hundreds of undercover agents into Britain.

Canaris was heavily pressured by Hitler to provide up-to-date accurate intelligence information and so many of these spies were under-trained and ill equipped, simply because Canaris felt under intense pressure to provide his leader with the requested information as quickly as possible. Agents were sent over who spoke rather bad English, carried obviously fake money, did not know their way around and who generally had a big sign on their head saying “I AM A SPY. PLEASE ARREST ME”.

These agents were quickly rounded up and arrested by the British police and promptly handed over to the security services. Many more spies actually surrendered themselves voluntarily when they arrived in Britain.

Realising that their lives hung by a thread because of the wartime laws regarding espionage, many of these agents gave up their more experienced colleagues who were still at large and on the run in Britain. Or, provided with their radios by MI5, they would simply radio Germany and request help from a colleague already in Britain, and MI5 would be there to swoop in and arrest them too. This way, it wasn’t long before the entire German spy network in Britain had been rolled up in one fell swoop.

But the security services soon realised that Canaris would not hesitate to replace those captured spies with others and they would have to go through the whole process all over again. 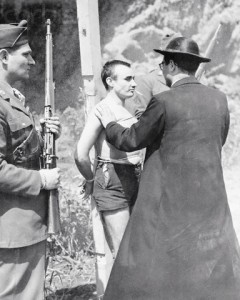 That was when they thought of an ingenious plan. Instead of announcing that the agents had been captured, they would keep it very quiet. Some of the spies would be spared their lives in return for playing ball while the others, who either refused to co-operate or who were deemed not useful were immediately hanged.

Those whose lives were spared were given a simple offer. If they wanted to live, they would continue to radio Germany and act as if everything was perfectly normal. But the information they would send back would be doctored information, provided by MI5 officers.

In this way, from 1940 to 1945, unsuspecting Abwehr officers received totally bogus information about phantom troop movements, numbers of planes and ships (always grossly underestimated), gossip from fictitious soldiers, fake orders from top generals, and much more. Since German codes had long since been broken, British experts were able to see at a glance whether the Abwehr believed it all and how urgently they requested certain types of information.

Setting the Stage for Normandy

But the work of Double Cross was made even more important in 1944, when the imprisoned German agents managed to convince their Abwehr controllers that the Allied invasion would come at the Pas-de-Calais and not Normandy. This was called Operation Fortitude, and it ensured that Hitler did not order his Panzer tank divisions into the Normandy area which would have wreaked horrible carnage.

By carrying out this feat, Double Cross saved the lives of tens of thousands of soldiers who would have otherwise perished on the beaches. In fact, it was so convincing that when the Allied troops finally landed at Normandy, the Germans still did not believe it, thinking that Normandy was just a diversion. And the imprisoned agents were told via radio that they had just been awarded the Iron Cross for services rendered.

After the war, the Double Cross system became highly classified and it remained that way until 1972 when the former chairman of the Twenty Committee, John Cecil Masterman, wrote a book about it called The Double Cross System In The War 1939-45. These days, if you want to read a fictitious novel about the XX committee (but which is heavily based in fact), you can’t do any better than Daniel Silva’s “The Unlikely Spy”.