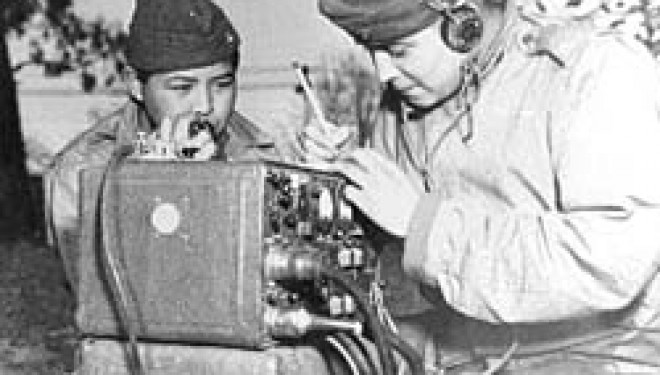 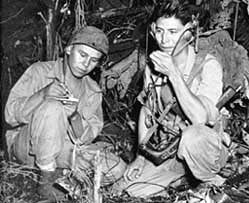 “Maintaining secrecy, particularly during wartime, is vital to the national security of every country.”

This was definitely the case during World War II. During the war our nation’s secrets were becoming harder and harder to keep.

This difficulty was because the Japanese were becoming more and more proficient at breaking U.S. codes. However, there seems to have been one code that was impossible for the Japanese to break.

Even the Japanese now admit that they never broke the American Navajo code used by the U.S. Military during World War II.

The Idea to Recruit the Navajo

The idea to use the Navajo language as a military code was that of a World War I veteran by the name of Philip Johnston. Being a war vet himself, Johnston understood the importance of codes during wartime. Johnston hit on the idea after reading articles about Native American Signal Men in the Canadian Army, and the U.S. Army using Native Americans in training maneuvers in Louisiana. 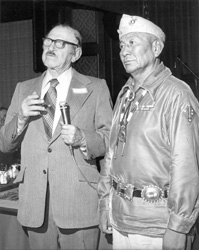 Johnston was the son of a missionary and grew up on a Navajo Reservation. He had an intimate knowledge of the Navajo culture and language. Armed with this knowledge and its potential uses that he read about in the articles, Johnston proposed his idea to the U.S. Marine Corps.

Johnston was able to sell his idea of Navajo Code talkers based on a few little known facts that he learned while growing up on the reservation.

During the 1940s, the Navajo population consisted of about 60,000 people. Many of these people were bilingual, able to speak both Navajo and English. Schools were set-up on the Reservations to teach English to grammar children. Other schools were also set-up so that young adults could learn a skill.

Johnston went on to explain that the people whom attended these schools would easily meet the military’s education requirement. Another selling feature to the use of the Navajo language was the fact that the language was very complex and passed down from generation to generation by word of mouth only. At that time, most of the language remained unwritten. 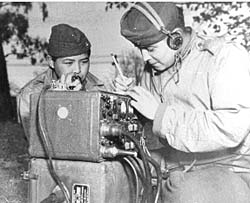 Due to the complexity of the language and the lack of resources to interpret it, only those with an intimate knowledge of or intense study of the Navajo language could hope to decipher such a code.

Marine Corps put Johnston and his idea to the test. In an experiment, the Marine Corps set-up two phone lines and gave a group of Navajo a series of common military messages to code, transmit and, decode. The groups of messages sent were decoded and read back nearly verbatim as they were given.

Impressed, a Marine Corps general wrote a recommendation that they should recruit at least 200 Navajo men for the Amphibious Corps, Pacific Fleet. Philip Johnston was put in charge of the enlisting Navajos for the specific purpose as messengers. However, any Navajo man enlisted had to meet the military’s age, health, and educational requirements.

Recruiting the Navajo for WWII

The first recruits arrived in San Diego, CA on May 5, 1942 for basic training. After basic, they were sent to Fleet Marine Training Center at Camp Elliott, where they received special courses in the transmission of messages and instruction in radio operation.

While at Camp Elliot, the 29 new recruits were entrusted with developing the military’s (even the world’s) first Navajo code.

The new code consisted of 211 distinctly Navajo terms that were assigned military definitions. These new recruits, who became known as Code Talkers, also assigned a Navajo word to describe each letter of the English alphabet. That way, any word not defined in the list of 211 could be spelled out in the Navajo code.

The program became so successful that the code and the number of recruits grew throughout World War II. During action, the Navajo code talkers proved themselves time and time again. The code and the recruits who created it remained classified and kept secret until 1968.

In 2001, the Navajo Code Talkers were honored by the government for their duty. Each member of the original 29 recruits was awarded the Congressional Gold Medal for his service during World War II.

For more information about the Navajo Code Talkers, visit NavajoCodeTalkers.org