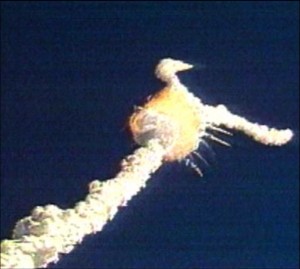 The Challenger shuttle completed nine missions for NASA. However, the mission is remembered mainly for the space shuttle Challenger disaster that took place on January 28, 1986.

This date was when Challenger was launched for its tenth mission. However, shuttle was never able to complete its mission. Seventy-three seconds after its launch, the Challenger shuttle disintegrated over the Atlantic Ocean, killing the seven crew members aboard.

The disaster lead to a two-year investigation and the scrubbing of all of the other shuttle launches for nearly three years.

Though officially ruled an accident caused by an O-ring failure, FBI reports indicate that a call was placed the night before the launch telling a local news affiliate that Challenger would be destroyed and its crew would never make it home alive.

The official investigation into the space shuttle Challenger disaster describes a failure with an O-ring. The investigation found that an O-ring seal in the right solid rocket booster (SRB) failed at the time of liftoff. This failure caused a breach in the SRB joint it was supposed to seal, allowing pressurized hot gas from within the solid rocket motor to reach the outside.

Once the gas reached the outside, it collided with the adjacent SRB attachment hardware and the external fuel tank. This collision led to the separation of the right-hand SRB’s aft attachment and the structural failure of the external tank. Once this seperation and structural failure occurred, natural forces took over and promptly caused the orbiter to disentagrate in mid-air.

However, FBI declassified documents reveal a heavily redacted report that vastly differs from the findings of the official investigation. That report states the following:

At approximately 1:50 P.M. on January 28, 1986, several hours after the explosion of the space shuttle, Challenger, Boston FBI received a telephone call at the complaint desk from [Redacted] Channel 7, A CBS-TV Affiliate. [Redacted] indicated that the newsroom at Channel 7 received an anonymous telephone call at 8:35 P.M. on January 26, 1986, the night before the scheduled launch of the Challenger, in which the caller indicated that he was part of a group of three people who were going to sabotage the shuttle, causing it to blow up and kill all aboard.

The FBI took the threat seriously after the shuttle exploded the next day and began to investigate. After interviewing the staff at the local news station that received the call, the FBI discovered that the call was disregarded by news reporters, no notes were kept and the “story” was never distributed to the news desk. One key point that the anonymous caller kept repeating was the fact that he was not crazy.

To find the caller, the FBI set up a sting operation. This operation depended upon the caller calling the station back. During his initial call, he stated that he would call back if the shuttle exploded. True to his word, the caller called back the following evening.

As the caller dictated his instructions to the news station employee, the FBI listened in, took notes, and planned their operation.

The caller planned to meet the news station employee at a local steak house. This meeting was to give the employee all of the information concerning the space shuttle Challenger disaster. The FBI and local law enforcement staked out the restaurant, and at the agreed upon time, the prime suspect was spotted in the establishment. The FBI went in and verified the suspect’s identity by posing as the news station employee. When the verification was made, the prime suspect was arrested.

Upon interrogation, the caller was identified as a man who had made the same claims earlier during the year. Previously, he had walked into the news station and claimed to be responsible for a series of plane crashes and other shuttle delays.

Further interrogations also led the investigators to the conclusion that the caller, “appears not in possession of full faculties.” Finally, the caller was released, but not without a recommendation that he should be committed on the basis that, “It is entirely feasible, and in all probability likely, that [the caller] will make similar calls prior to departure of future space shuttles.”

Even though the caller was deemed as crazy and unreliable, the fact is that he was right about the explosion. So two schools of thought can be derived from these documents. Either the caller was responsible for the Challenger disaster and fooled the FBI, or it is proof that even a crazy man gets it right every now and again.