In my recent interview with Sappho Wolf, a self-described vampire, she answered a list of questions and did so eloquently and in a way that I felt was in keeping the topic palatable to the general public.

In particular, I noticed that she expended some effort in trying to avoid the issue of blood-drinking, even when I explicitly asked about it in one of my questions. I could tell that despite her elaboration upon all of the other aspects of being a vampire, this was one area where I would have to pry a little bit.

So, I sent Sappho a follow-up question regarding the issue of drinking human blood. Not having much information about the “real” vampires that exist in our world today, this is a point that I really wanted some clarity. Sappho was more than willing to oblige.

“This is the central question that I think readers will have and I don’t think you really answered it in #2 – that is:

Do people that call themselves vampires drink each other’s blood?”

Sappho responded with a full writeup – an effort to explain a behavior that many of our readers probably cringe when they read about. 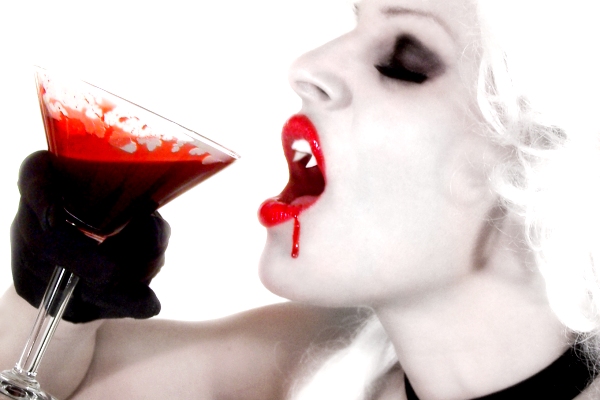 The drinking of raw human blood. Here is how Sappho explained it in this follow-up.

Sappho Wolf on Blood Drinking Vampirism – In Her Own Words

I think it’s a most natural curiosity, and most interviews I’ve done about the real vampire sooner or later get to this hot button issue. If I come across as too glib, I’d be happy to break down my answers even more.

Yes. There are people who identify themselves as vampires that drink blood.

Your readers will not be attacked by a real vampire and become take out. However, there are dangerous people with violent intent on the loose who might choose to call themselves vampires.

I can speak to the first part. As to the danger of “vampires”, violent criminals can call themselves anything. We in the community are seeking to make the difference more readily understandable, but for the moment it’s a semantic morass.

In the community, the term for these vampires is sanguinarian. Generally speaking, these are not people living off of only blood (there may be a few who have tried this, but I can’t be sure). For whatever reason, the experience of consuming blood brings a variety of sensations, from heightened awareness to mental lucidity to physical strength (or the perception of having greater physical strength). There are also sanguinarians drinking blood because they feel they personally need it.

Where do these vampires find blood? You may be surprised.

There is a growing community of willing donors anxious to have their blood drunk by vampires. One of the understood rules of the vampire community is that feeding should be consensual–that is, a beneficial experience for both vampire and donor.

A trend that fortunately has gained a hold is a careful screening of feeding partners and the decision for partners to be “monogamous”. Of course this is in reaction to the HIV/AIDS (among other diseases) scare. If anyone does actually believe they are immortal, they’re not convinced enough to risk their existence for the taste of blood.

No one is ostracized for having a preference to drink blood. In my own Order, we make room for sanguinarians (again with mutual consent being mandatory). There are several groups claiming that the only true vampirism is blood vampirism, but these are far outnumbered by less strict codes. In the end, some of us need to tap into a physical energy source like blood while some of us have found our energy in other ways.

No. Drinking blood is not the defining characteristic of a vampire.

You will not be made an immortal.

You will not grow overlarge canine teeth (fangs).

You do not need to sleep in a coffin (unless you want to).

You’re not going to suddenly possess any kind of super powers, unless you count the ability to play with energy which in and of itself might be considered a super power.

You’re not going to be immune from disease, although you may find yourself becoming a stronger person physically as well as mentally.

Walking in the steps of the vampire is not going to give you instant sex appeal or improve your social status. These are things mostly empowered by personality.

You will most likely feel more in control of yourself and your surroundings.

You may experience a dramatic increase in confidence.

You may come to understand how thought becomes deed in very real terms.

As vampires go, we are very much real. Hold this thought fast to your heart, because doubtless you will encounter cynics and scoffers. They don’t matter. You know the truth.”

As a journalist that tries to remain open-minded about some of the most surreal and unreal aspects of the world, this remains an issue that baffles me more than most others. While, in many religions, there are some unusual and arguably useless or even delusional rituals and activities – I think many readers would agree that the consumption of raw human blood as part of any belief system or lifestyle is difficult to swallow (pun intended!)

I would also like to thank everyone, from both sides of the community and from the general public, for voicing your position and concerns in a respectful way. I know I’ve personally learned a lot about the concept of vampirism throughout this series, and I hope that you have as well.