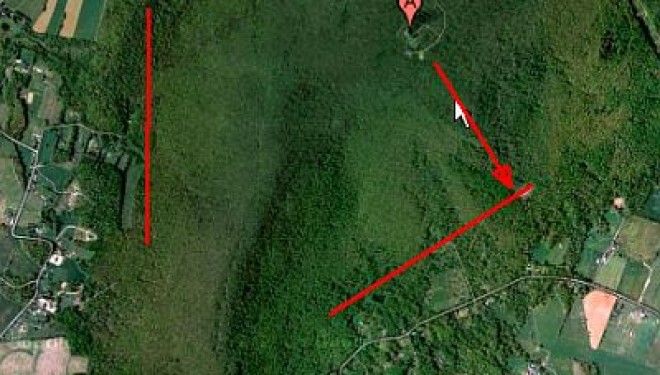 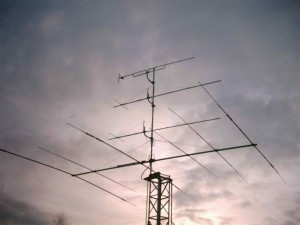 About a year ago, I covered a couple of potentially secret government installations in South Mountain, Maryland. Response has been tremendous, and it’s triggered a bit of an interest in readership for taking these sort of “virtual adventures” of remote locations. We plan to post an occasional Satellite/Photo expedition for our readers at least once every month.

We’ll cover remote areas of the world where strange creatures are allegedly sighted, where there are supposedly secret government installations, or where unusual phenomenon like animal mutilations or UFO sightings have been reported. So, please bookmark this site and check back for the next adventure.

To start off this month, I wanted to take a quick look at a facility that one of our readers knew about from her local area, and decided to go for a drive to check out. This interesting government facility is located just south of Boonsboro, Maryland.

“South of Boonsboro ,Md. there is another area! It’s at the end of Lambs Knoll Rd., that starts just feet from the monument to fallen Civil war Gen. Reno. You can drive right up to the top of the mountain till you get to a fence with signs that read “U.S Goverment -No Trespassing”. You can check it out on google maps. A very large water storage tank, a microwave tower and what looks like a uhf/vhf antenna. Also a medium sized office building and very large parking lot.

Any place there there’s a sign that reads, “U.S. Government – No Trespassing” is always an intriguing site to check out. Given the documented history of unusual research conducted by governments around the world – it’s always interesting to look for clues for unusual activity in and around these facilities. You get to the access road from Reno Monument Rd, which obviously takes you to the historic monument. When you turn off R. Monument Rd onto Lambs Knoll Rd, you’ll be on your way up into the wilderness and up the mountain. 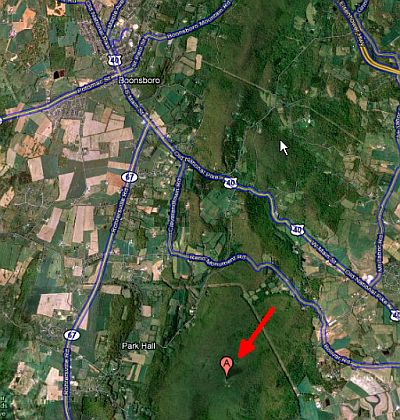 As you can see from the map below, this facility (like most secret federal facilities) is situated in the very middle of a vast tract of wilderness. The one access road is at the monument and paved. Other clearings are only a strip for high-power lines that cross through the forest. Other than the possibility of rough walking trails, it appears that there’s absolutely nothing on this land. 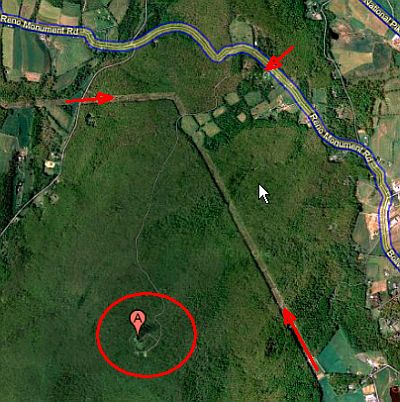 When you get to Reno Monument, shown to the right of this photo, you’ll be at the access road known as Lambs Knoll Rd. There doesn’t appear to be a gate at this point, and anyone can take a ride on the access road as far as these overheads show. This is the first clue that this probably isn’t a very secure/secret facility. 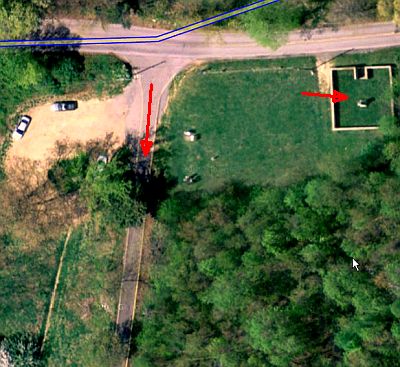 As you’re driving up the mountain, it appears that the road is single-lane, because every few hundred feet or so, there’s a “breakdown” area where you can get out of the flow of traffic if someone is coming in the other direction. Obviously, drive very slow…

If you approach the perimeter using the road, you’ll eventually come to this spot – the fence that I believe our reader was describing. Again, the fact that you can get this close to the facility via a nicely paved road is probably another indication that this facility, while somewhat secure, is not a top secret facility that the government wants to keep secluded. The obvious seclusion of this facility is probably mostly for security reasons – any facility this remote is pretty easy to secure. If it’s an important military/government communications station – this would obviously be an important concern. 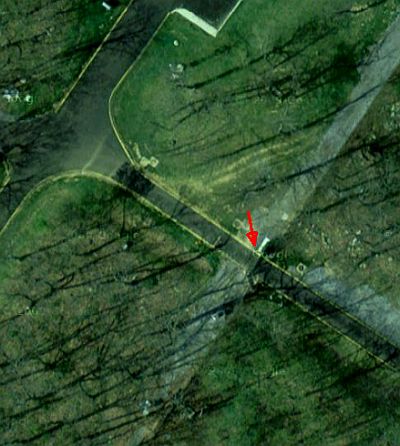 This is the layout of the facility. The north end of the complex has a large paved area with a small building and what looks like a dumpster. Buildings in the center look like they would be office or supply buildings, although the brown buildings could store small equipment for maintenance. 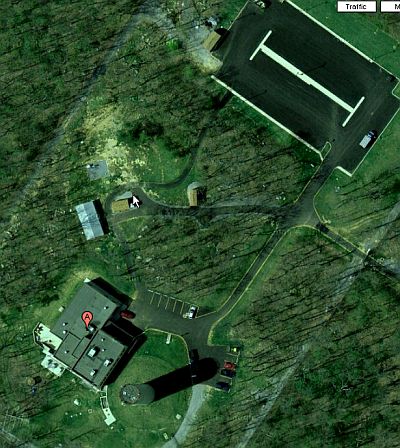 The large building at the South end of the property is obviously the office area, with a small collection of cars parked in the log, a very large storage tank in front of the building, and as you can see below, two large antenna arrays at the far Southern end of the property. As the reader correctly concluded, these are not microwave, but likely large UHF/VHF antennas.

While this is likely a standard USG communications facility, given the lack of security along the road itself and the ease with which locals could get so close to the property – one interesting aspect of this facility is just how remote it is. As you can see from the map below, the nearest private residences are to the South and West.

The closest point to the South looks to be approximately three-quarters of a mile away, and to the West, just under a mile away. The seclusion itself is interesting, but the odds are pretty good that the location is necessitated by the fact that it is a communications station utilizing UHF/VHF, which requires the high mountain location.

If you know of any strange or mysterious facilities near where you live, please feel free to contact me with your ideas for our next satellite/photo adventure. If we can, I’d like to incorporate ground photos into these expeditions as well. Please feel free to submit your story ideas in the comments section below!