Weathermen Manifesto – A Legacy of Failure

There is no doubt that the 1960s and 70s was a time of radical social and political change. There were many socio-political groups that emerged during this time to usher in that change.

However, each of these groups had their ideas of what that change entailed and how exactly to usher it in. One of these groups was an organization known as The Weathermen.

The Weathermen, also known as the Weather Underground Organization (WUO), was a radical left organization started in 1969. It branched off from the Students of a Democratic Society, advocates of what they called the New Left; simply put, a kinder, gentler Communism.

However, WUO was neither kinder nor gentler. They planned to usher in their version of change through scare tactics and violence. These tactics not only backfired, but went on to hurt all protesters and socio-political groups when Nixon, along with the rest of the federal government, decided to use the WUO as the poster-children for all American protesters.

The tactics used all ranged in varying degrees of violence, but usual ended in failure.

The Weathermen and Timothy Leary

One exception to this case was the jailbreak of Timothy Leary. Dubbed “the most dangerous man in America” by the Nixon Administration, Leary was infamous for his Psychological Research in to the effects of LSD, habitual drug use, and government protest.

While serving a prison sentence, the WUO broke Leary out of jail and smuggled him to Algeria. In a Letter signed “Friends of Timothy Leary,” the WUO is given and accepts full credit:

Leary sent information to the Weather Underground through a sympathetic prisoner that he was considering making a deal with the FBI and waited for their approval. The return message was ‘we understand.’

The Days of Rage

Although the group reached minimum success with this one action, their great claim to fame was a disastrous failure. This failure was known as the Days of Rage. This event was a three day tirade during the month of October in 1969.

The tirade was the WUO attempt to “ignite the revolution” through a series of planned protests. Each day ended with group members being arrested and the rallies being foiled by the police. The only thing the event resulted in was a series of broken storefronts and shattered windshields.

If anything, the Days of Rage actually hurt the WUO. Their closest allies, the Black Panthers, came out with a public statement after the event saying, “We believe that the Weather [Underground Organization’s] action was anarchistic, opportunistic, individualistic, chauvinistic, [and] Custeristic… It’s nothing but child’s play – it’s folly.”

This miserable failure in Chicago sparked an 11-month strategy of terrorist-style bombings aimed at the federal government, localized in New York City.

These bombings were a way for the group to “bring the war home.” However, this was a miserable failure as well.

WUO always chose targets that were politically symbolic, and the bombs were planted in retaliation for some action that the Weathermen perceived as oppressive; such as, a bomb was set at the home of a New York City judge who was presiding over a trial of some Black Panthers; another went off in a Pentagon lavatory after President Nixon ordered increased bombing of North Vietnam; still another bomb exploded at the office of the New York State Department of Corrections after the brutal suppression of the Attica prison riot. 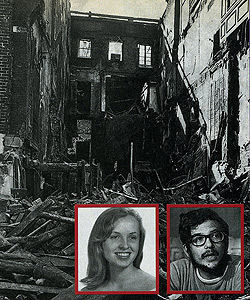 These bombings accomplished two things, they shortened the WUO membership list by three people and they changed they way WUO tried to make change.

On March 8, 1970, a townhouse in New York’s Greenwich Village blew up. That townhouse was used as a WUO bomb factory. Three WUO members – Diana Oughten, Ted Gold, and Terry Robbins – were killed in the blast. As a result, the WUO changed its tactics back to mainstream protest techniques.

By the late ’70s, the WUO began to collapse under the weight of their own internal issues and eventually fizzled out into nothingness.

Some members tried to keep things going with the occasional jailbreak attempts or bank robbery, while others joined the Communist, or Old Left, party. Many others just simply gave up and re-joined mainstream society.