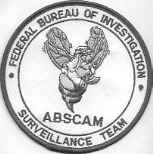 ABSCAM was the codename given to an FBI sting operation in 1980. The operation was an investigation into several senators and corruption in Congress.

Two FBI agents posed as fictitious sheiks who would attempt, and succeed in bribing several members of Congress to protect investments and to unlawfully assist in immigration efforts. The whole operation spanned almost two years and had a final bill of almost $800,000.

The first of the two FBI agents central to the sting operation played Sheik Kambir Abdul Rahman and was responsible for bribing several members of Congress.

First up was Sen. Angelo Errichetti. ‘Rahman’ was able to bribe him with $400,000 in exchange for protecting the Sheik’s supposed investments in a Camden sea port and an Atlantic City casino.

The above sting would eventually lead to Sen. Harrison Williams being listed as a potential corrupt politician after his dealings with Errichetti. He was also targeted in a sting operation and was filmed accepting vast quantities of cash as well.

Both of these operations were conducted on a large yacht acquired by the FBI. It was kitted out with cameras and bugs to pick up the meetings, which would eventually be used as evidence during the ensuing prosecutions.

The second operation would result in several members of congress being filmed accepting bribes in return for helping sheik Yasser Habib (the second undercover FBI agent) to gain a green card so he could live permanently in the US.

Each individual operation was almost identical. The FBI had acquired a house which would act as the sheik’s residence. They thoroughly bugged the house and had hidden cameras to capture the meetings.

Several members of Congress would then meet with the undercover FBI agent and accept bribes in return for influencing his green card application.

The camera technology was not very advanced at the time and needed huge amounts of light in order to be effective. Luckily, the FBI passed this off with a cover story that the ‘sheik’ liked plenty of lights overhead to remind him of the desert sun of his home country.

The senators who were caught in this phase of the sting, all from the Republican party, were:

Each of them accepted various amounts of money and down payments in exchange for favors.

Sting Operation Turns Up a Hero

However, one person, Senator Murtha, who the FBI thought was corrupt turned out to be the opposite. He was led to the house upon the promise of a political donation. When the sheik said he didn’t know what such a donation entailed but wanted to give him money anyway, the senator backed out.

When the prosecutions came to light, the senator was reported to have said “I find it somewhat repulsive that I’m on tape, but now I’m called a hero. It’s a sad state of affairs when it’s heroic to turn down a potential bribery situation.”

The investigation was brought to an end in February of 1980 when various media outlets caught wind of it and decided to run with the story.

Eventually, seven of those politicians under investigation would be given prison sentences ranging from one to five years. They were also fined between $10,000 – $50,000 each.