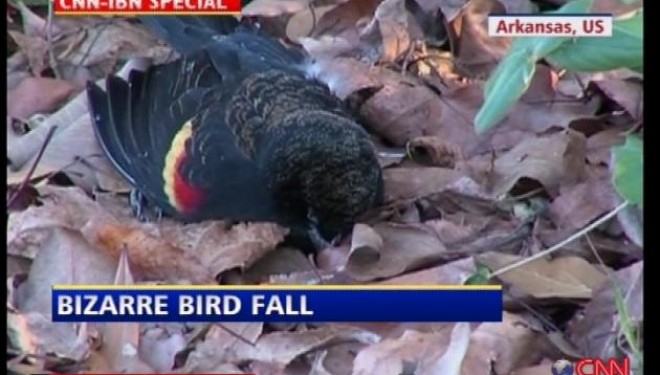 There are few events that will bring out conspiracy theorists in droves. It usually has to be something very big and very public.

During the early 90s, it was crop circles. The late 90s and new millennium brought the millennium bug. Most of us thought we would have the year off, at least until 2012 rolled around.

However, a recent event that was both very large and very public has the world’s conspiracy theorists frothing at the mouth. Ladies and Gentleman, introducing the “Aflockalypse.”

That’s right, folks. You read it correctly. No typos here. The Aflockaypse.

Unless you have been living in cave or busy preparing your underground shelter for what the Mayans have predicted all those centuries ago, then you have certainly heard of the phenomenon.

However, just so that we do not lose the fledgling theorists, the Aflockaypse refers to the anomaly of the mass death of thousands of birds. These recent deaths took place mainly in the U.S., but many believe that other recent bird kills (along with fish kills) throughout the world are all part of the same phenomenon.

The term Aflockaypse is not the official name, but this unofficial name has taken the web by storm. Not satisfied with the “official” government answer, conspiracy theorists are flocking together to discuss their ideas and report those ideas via the web.

You name it, its out there; from 2012 to British Petroleum (Poor BP, you cause one environmental catastrophe and everyone is out to get you). The list goes on. Here is just a sample:

1. The government release of a chemical weapon in the atmosphere. One idea is that is was a test of the delivery system that will be used in Afghanistan to deliver chemical and/or biological agents. Or, the secret testing of an electromagnetic weapon. However, another idea is the old standby; accidental release or misfire of either weapon.

2. This is all part of the 2012 catastrophe. A shift (or hole) in the magnetic field caused the birds to commit a mass suicide. It is these mass deaths that signal the beginning of the end that was predicted by the ancient Mayans.

3. BP’s drilling of deep-water wells is interfering with natural tectonics. The mass die off is proof of an upcoming massive earthquake.

4. (This one is my favorite.) The birds were caught in the wake or exhaust of a UFO.

5. The End Days as stated in the Bible. Many Bible scholars and theologians cite Zephaniah 1:3, “I will consume the birds of the sky and the fishes of the sea.”

This is only a taste of what conspiracy theorists are cooking up in regards to the mass animal deaths.

A total of 100,000 drum fish washed up along a 19 mile stretch of the Arkansas River, nearly 5,000 of red-winged blackbirds roughly125 miles from the Arkansas fish kill, 40,000 dead devil crabs in England, tons of more dead fish in New Zealand and Brazil, plus more dead birds are dropping from the sky in the central and southern U.S.

Much Ado About Nothing

Most scientists seem to agree that these mass deaths, or die-offs, are quite common and usually unrelated.

“Although wildlife die-offs always pose a concern, they are not all that unusual,” said Jonathan Sleeman, director of the USGS NWHC in Madison, Wisconsin, “It’s important to study and understand what happened in order to determine if we can prevent mortality events from happening again.”

The records, according to Sleeman, state that, “while the causes of death may vary, events like the red-winged blackbird die-off in Beebe, Ark., and the smaller one near Baton Rouge, La., are more common than people may realize.”

Scientists usually cite biological or environmental factors as the most common culprit of mass animal die-offs.

No matter who you believe, the theorists or the scientists, one this is certain. This mystery will not be solved any time soon and the longer it takes to solve, even more theories will circulate the web.