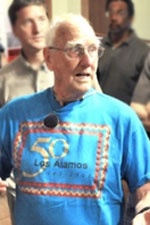 In February of 2011, Fox News reported the account of Robert Carter, one of 6,000 Manhattan Project scientists that contributed to the Top Secret Project.

The Manhattan Project was an effort by the Allied Powers, led by the United States, which resulted in the first atomic bomb during World War II. The U.S. Army component of the project was labeled as the Manhattan District or Manhattan Engineer District, but “Manhattan” gradually superseded the official codename for the project.

Carter, now 91 years old, was one of the youngest members of the research group of Manhattan Project scientists.

His main responsibility was to conduct experiments, studies, and research on nuclear reactors fueled by uranium. In the article, Carter recalls his work was, “directly related to the size and configurations to the nuclear cores of the plutonium bombs.”

Carter actually conducted his research under the guidance of J. Robert Oppenheimer, the father of the atomic bomb.

Carter, now one of the last living researchers involved in the project, was present during some of the atomic bombs most historic milestones. One of these milestones was the Trinity explosion in New Mexico. The Trinity explosion was the result of first nuclear device ever detonated. It occurred in July 1945. Carter described the scene to Fox News as, “overwhelming as it detonated, sitting there in the desert in the early morning.”

Even though he is proud of his scientific contribution to history, Carter does regret that the bomb was ever used against people.

After his tenure with the Manhattan Project ended, Carter went on to finish his graduate studies and returned to Los Alamos to continue his nuclear research.

This was a career path followed by a number of other Manhattan Project scientists as well. Robert Carter later went to Washington D.C. to work for the Department of Defense to research the biological effects of nuclear weapons and even worked in the Nuclear Regulatory Commission.