Are Backscatter X-Ray Vans Coming To A Street Near You?

The company claims to have sold their x-ray equipped vans to every continent except Antarctica. They do not share their list of clientele; however, it is known that the United States Department of Defense has purchased over 500 units.

Most of the units were purchased for use in Iraq and Afghanistan operations. Some of these units have been issued to police who have been using and testing them in various parts of the United States without public knowledge or consent.

Just like their TSA airport counterparts, the vans have the ability to store the images they capture. The radiation from these units penetrates clothing, vehicles and their contents as well as some buildings. The mobile units have a range of up to 30 feet away. This is seen to many observers as a huge infringement on 4th amendment rights.

What the supporters of this technology don’t want you to see is a letter written and signed by 4 leading researchers and scientists from the University of California at San Francisco in the fields of biological radiology and cancer.

It was addressed and sent to John Holdren. Holdren is the Assistant to the President of the U.S. regarding Science and Technology.

These scientists voiced their concerns in a plea to withdraw these machines from public use due to the lack of independent testing. In the letter, these scientists also somewhat attack the FDA’s testing, or lack thereof.

They claim that tests performed were based on radiation exposure to the whole body, but that the Backscatter machines don’t penetrate much further than the skin. Therefore, the dose specifically applied to the skin is much higher since it is not absorbed by the entire body.

In layman’s terms, if you put an orange in a microwave for 30 seconds, not much will happen to it, but if you could somehow microwave only the skin of that orange for the same 30 seconds, you would cook the skin. 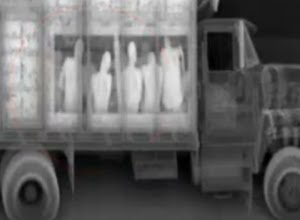 The scanners work similarly to a laser jet ink printer. Running beams of radiation back and forth across the body, and from top to bottom, just much faster. Some of the problems foreseen with the backscatter x-ray machines have been electric surges, or hardware/software failures, where the beam stays in one place and radiates one spot for too long.

Other concerns about the DNA changing radiation are that some areas of the body are more sensitive, specifically the retinas and genitals.  The researchers stated that this form of backscatter x-ray radiation poses risks to children, cancer/HIV patients and the elderly.

In light of all of these concerns about airport scanners using this technology, the TSA has blatantly stated, “TSA has not tested the advanced imaging technology that is currently used at airports in mass transit environments and does not have plans to do so.”

What kind of society are we to back a division of “security” that can make such blatantly ignorant statements with such little regard to human safety? Isn’t the whole point of creating such technology in the name of safety? Whether its due to money or power or both, public health has taken second stage in the security business.

I have never feared for my life in my own country, and do not approve of the fear mongering tactics employed by our government in recent years. The U.S. security policies are spreading beyond the originally stated intentions (just as we were warned would happen once the Patriot Act went into effect).

Taking a Stand for Liberty

The good news is, grassroots movements that want it all put to a stop are also picking up steam. In the face of “terrorist threats” on a daily basis, the question I tend to ask myself is, “Why are all the latest technological developments in security and safety pointed inward toward our own communities?”

It almost seems like the government feels the greater threat to their own survival is not from some foreign country, it’s in the freedom of its people.

Our military occupies foreign countries in order to secure strategic assets, not to enable the people in those countries as we are patriotically told. I could half-understand if we had developed some type of X-ray to look inside mountains for the purpose of finding terrorist cells, or a new solar powered stealth aircraft, but the cutting edge of the anti-terrorism knife is instead pointed inwards.

As a society, we are starting to resemble lobsters in a pot, with complete and potentially misguided trust in the handlers who control the heat. You can call me crazy if you want, but it seems that the water around us is starting to boil.