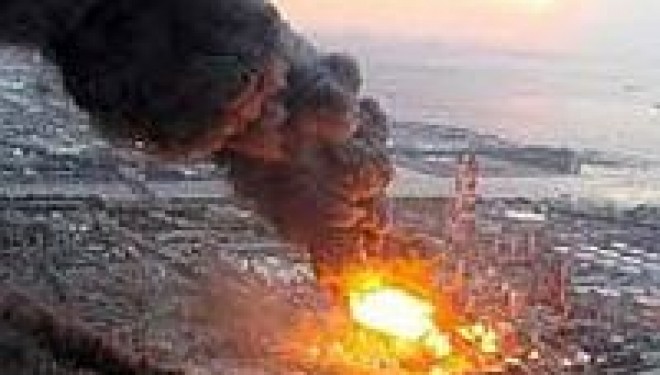 On March 25th, three Watchdog Groups – the Friends of the Earth (FOE), Nuclear Information and Resource Service (NIRS) and Physicians for Social Responsibility (PSR), all announced that they were collaboratively filing FOIA requests with the U.S. Department of Energy to learn why, specifically, the U.S. Government chose to evacuate all American citizens within 50 miles of the Fukushima reactor.

The groups are convinced that the U.S. government is not providing “the full picture of the scale of the of the radiation.”

This concern is even more troubling when you consider the same sort of tailored information about the spread of radiation across the world. According to the U.S. Government, although radiation has been detected in our skies and in our milk, and radioactive rainwater has been discovered as far as the East coast, apparently it’s nothing to be worried about.

Once again the “official” story does not seem to add up with reality.

We continue to hear reassurances like, “There is nothing to be concerned about”, and “Radiation is within safe levels of human health”.

However, it’s all a little disturbing, considering the fact that radioactive elements cause cancer and leukemia which are silent, but not immediate killers. You also can’t rid yourself of radiation using traditional hygiene techniques. Scrub all you want, it won’t go away.

What About the Other Radioisotopes?

One concern vocalized by the watchdog groups is that the primary radioactive elements described by mainstream media thus far have been Cesium-137 and iodine-131, along with a mere suggestion of plutonium and radon beams. Here is a list of other radioisotopes associated with these types of disasters that haven’t been a focus yet:

Other pollutants to be aware of include:

The EPA has recently done some rearranging to assure the public that everything is still within an acceptable scope. Their solution: to raise the acceptable safe levels of radiation, as was found in an internal email from Charles Openchowski of the EPA.

WARNING: This is not a joke. Read the letter for yourself. It’s worded in such a way that they expect anyone with a US public education would not be able to decipher it.

One of the most baffling government responses that watchdog groups have caught on to is also one of the most concerning. The Canadian government, seemingly trying to “out-dumb” the US, has turned off its radiation monitoring equipment as of March 25th due to lower radiation level readings.

They claim that they will now only take periodic readings of radiation levels, since levels have decreased. The common sense of prescribing a maneuver like this while the crisis still hasn’t been resolved is appalling.

Radiation continues to spew into the air and is even being dumped by the thousands of gallons into the ocean now – 11,500 gallons of radioactive water to be exact.

“Scientists also confirmed that ocean currents will swiftly dilute the radioactive iodine-131, eliminating risks to human health and the environment.”

I think Mike Adams of NaturalNews said it best when he stated:

“Any amount of toxic radiation can simply be declared safe by dumping it into the ocean and watching the waves sweep it all away. By this same logic, you could clean up a toxic chemical spill by swishing it around with wet mops and then declaring the zone to be safe again.”

Protect the People or the Special Interests?

I was once very proud to be an American. I felt fortunate to live in a country where I was the master of my own destiny, able to build my own fortune and family. We had organizations in place to ensure the food we eat and air we breathe are of the safest possible standards.

Government agencies originally formed to protect the populace now have special interests and lobbyists to protect. More documents proving corruption and conflicting interests within government have been revealed with the “Freedom of Information Act”, and are proving every day that some of our great protectors are more concerned with corporate interests than with public safety.

The ATF formed to protect us from illegal arms, and their sales have been found to illegally inflate their numbers along the Mexican border for what appears to be an attempted rollback on 1st amendment rights and further border regulation.

The FDA has been passing genetically modified organisms, on an almost daily basis, with the only testing provided by the same corporations that create these potentially dangerous organisms.

That also goes for the slew of pharmaceutical products (although some are beneficial), where most of the products don’t address the root cause of the ailment and are very hard on the liver and other organs.

Now the EPA, the very organization set up to protect our environment, is seemingly lowering its standards once again, in order to maintain a semblance of “public safety” and the longevity of the nuclear power industry.