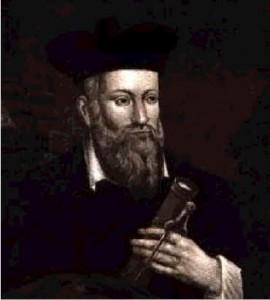 Nostradamus is one of the world’s most famous prophetic authors.

He is most famous for his book, Les Propheties, which consists of 4-line poems called quatrains that are grouped into sets of 100.

These sets of 100 are known as Centuries. As world changing events have occurred,many people point back to Nostradamus’s quatrains as proof that he predicted these events.

Events such as World War I and II and more recently, the terrorist tack on 9/11, are just a few examples of those events. These quatrains are so famous that when the 9/11 attack occurred, the web was flooded with false quatrains.

However, there are a number of sites where you can go to read the real Centuries of Nostradamus for yourself. Five of the best sites are listed below.

Sacred-Texts.com. The site describes itself as, “a freely available archive of electronic texts about religion, mythology, legends and folklore, and occult and esoteric topics.” This site not only list the original texts of Nostradamus, but you can read them in their original language, French.

Ebooks3. This is a free source for online books. This site boast a wide variety of book including Les Propheties. What is most interesting is that you can take your prophecies to go, since ebooks3 supports the Nook ereader.

DreamScape.com. This is another site that is home to the Nostradamus quatrains, but with a twist. You can read the full text there; however, you also have the ability to search the quatrains by subject. Though the author tries to leave the interpretation up to the reader, the way he categorizes the prophecies is a subtle hint to his interpretation.

PsychicInvestigator.com. The quatrain page is a bare bones webpage. The entire text is included; first the French, then the English translation. Black print on a white foreground, there is nothing there to lead the reader astray.

Nostradamus101.com. Nice site and easy to navigate. However, I would not put it in the realm of scholarly research. Though a lot of the text is present, the site is still a work in progress (which the webmaster admits to) and the reader has to muddle through a lot of interpretation and personal opinion of the webmaster. Nevertheless, it is a great place to start and very easy to read. Definitely worth checking out.

This is just a short list of sites to read over when researching Nostradamus and his prophecies. However, if ever given the chance, power down the laptop, get off the iPhone, and visit the Nostradamus Museum in Salon de Provence.

The museum boasts an audio-guide tour about the life of Nostradamus and copies of his work are available upon request.