CIA Photo Gallery of Cool Spy Gadgets From the Past 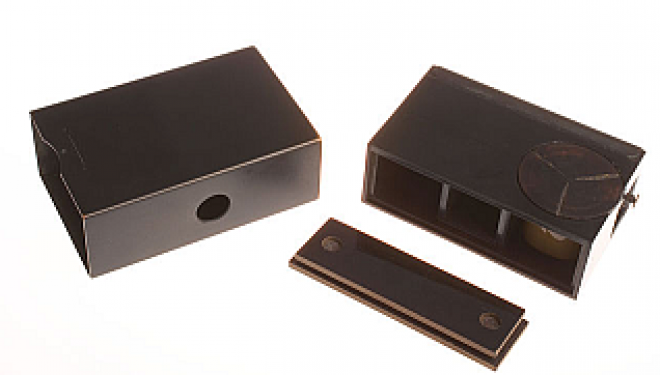 Do you have a fascination with cool spy gadgets?

If you do, you’ll love some of the vintage spy gear put on display by the CIA this year.

Some of the gadgets displayed at the virtual museum reflect the history of an agency that has obviously been striving for many years to develop more advanced and innovative ways to spy on people.

The following is a brief gallery of some of the more interesting artifacts from the CIA’s virtual Museum.

1. The Eastman Kodak Company developed a 16mm camera that was the size of a matchbox for the OSS. To further disguise the camera, a matchbox label was commonly added.

2. At first glance, it appears to be a typical Eisenhower Silver Dollar. However, and closer look will reveal that it was actually hollow. Due to its size and appearance, this concealment device was nearly undetectable.

3. Spying was not just a man’s game. When this seemingly ordinary lady’s compact was held at a certain angle, a secret code was revealed.

4. In World War II the CIA had the ability to read one’s letters without out them even knowning. The user would simply insert the device into the unsealed gap at the top of an envelope flap and then wind the letter around the pincers. Then, the letter could easily be pulled from the envelope without ever breaking the seal.

5. Insectothopter was a micro UAV developed in the 1970s. Shaped like a dragonfly, this tiny flying device boasted a tiny gas engine and that made the UAV quite impressive. Unfortunately, it was tough to fly in cross winds.

6. This hollow spike was used to hide message or film. The agent would place item into the spike, close it, and then push it into the ground to hide it. Then, another agent would come along, already privy to the spike’s location, and pull it out of the ground to retrieve the information. This form of communication was commonly referred to as a “dead drop.”

7. The Pigeon camera took arial photos to new heights. This tiny camera was actually affixed to homing pigeons. Pigeons could fly with in hundreds of feet a a target and blended in to the surroundings very well. Especially since the pigeon is a common site in larger cities. One thing that you can’t say about the CIA is that they weren’t creative. The ideas that the agency produced over the years, and the techniques they used to covertly hear, see and spook the enemy was at times innovative, spooky and sometimes downright funny.