Has a New Planet Been Discovered in Our Solar System? 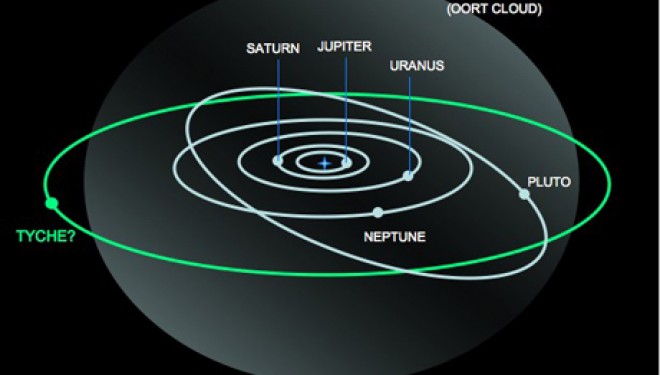 Last November, two astrophysicists, John Matese and Daniel Whitmire, proposed the existence of a new planet located in the Oort Cloud of our solar system.

This is a very controversial idea in the astronomy world. Many scientists dismiss the claims; while the two astrophysicists maintain that there is proof of the planet’s existence.

Then, there are others who believe that not only does this planet exist, but we will see it very soon; in 2012 to be exact.

John Matese and Daniel Whitmire of the University of Louisiana at Lafayette have been repeatedly claiming to have discovered evidence of a new planet’s existence since 1999.

The pair base their claims on irregularities found among long-period comets.

It has long been thought that the scattering of comets out of the Oort cloud was a random event. However, it appears that many of these comets are originating from the same circle in the sky.

Similarities seem to indicate that there may be something in the OortCloud perturbing these comets and flinging them into the inner solar system. Matese and Whitmire claim that something is a planet. A large gas-giant planet they named Tyche.

To actually alter the orbit of comets, the planet would have to be a tremendous size – and that is exactly what the duo is proposing.

Their claim is that Tyche is roughly four times the mass of Jupiter, yet similar to its size. The size similarity is due to the fact that degenerate pressure normally causes massive gas giants to only increase in density, not in size, relative to their mass.

Matese and Whitmire claim that such a massive planet would have a huge gravitational effect on passing comets. The two have authored a paper describing their theory, providing more theoretical details on Tyche.

Though no hard evidence of the planet’s existence has been brought forth yet, there is one group that has not only subscribed to the idea of a new planet, but they also added their own little twist.

This group is the 2012 theorist, the individuals who believe that the world is going to end on December 21, 2012 due to the end-cycle in the ancient Mayan calendar.

According to these individuals, this Tyche is actually Nibiru. This theoretical planet first gained fame in 1995, when it was stated that it would sweep though our solar system and ultimately collide with Earth.

Believers base their claims on the idea that the recently proposed Tyche has similar characteristics to Nirbiru.

In separate theories, both planets are similar to Jupiter in size, but are much denser. They are also both rogue planets.

However, science has dismissed the Nibiru theory as pseudoscience and its association with the propose Tyche as ludicrous.

“I doubt that is real, but even if it were, the association with Nibiru is fantasy. Its distance is estimated as 15,000 times the distance from the Earth to the Sun — that is almost 400 times farther than Pluto, or about a thousand billion miles. The mythical planet Nibiru, if you believe the stories about it, is on a 3600-year orbit that brings it into the inner solar system and is headed for an encounter with Earth two years from now. They could hardly be more different. Please use a little common sense.”

Most scientists agree with Morris’ sentiments about Nibiru and Tyche.

Hal Levison, a planetary scientist at the Southwest Research Institute in Boulder, Colo., who authored a paper on the Oort cloud for Science Magazine stated:

“I haven’t read [the latest] version of [Matese’] paper, which he claims now has better statistics than the previous attempts, where he also claimed that he saw evidence of this object. But in previous papers, I really think he did his statistics wrong. Incredible claims require incredible proof and I really believe that he doesn’t understand how to do this statistical analysis correctly.”

These criticisms are echoed throughout the field of Astronomy.

To verify the existence of Tyche, many scientists including John Matese and Daniel Whitmire, are waiting for the date from NASA’s Wide-field Infrared Survey Explorer (WISE).

However, these scientists will have to wait until 2012. According to NASA’s WISE web page, even though they have received data from WISE, it is too early to tell.

NASA states, “The full survey, scheduled for release in March 2012, should provide greater insight” into the existence of Tyche.