How Does NSA Get Away With Running Top Secret Menwith Hill in the UK?

North Yorkshire in the UK is known for its undulating and verdurous hillsides, scattered with walkers and sheep poo, cozy country pubs selling ‘real’ ale and Yorkshire bitter, and simple folk who talk funny.

This tranquil and traditional corner of England at its most ‘English’ is the last place you would expect to find a $10 billion dollar “star wars” inspired defence shield that houses 33 satellite dishes, enclosed within giant ‘golf balls’ that receive data from four SBIR satellites 24,000 miles above earth.

This almost unbelievable scenario is the situation with Menwith Hill in North Yorkshire, the home of a major US military site that has been shrouded in secrecy during its two-decade construction.

It has now been reported as the site for “Echelon”, the top secret US eavesdropping system that intercepts communications from around the world.

A Space Based Infrared System

The project at the RAF Menwith Hill base is linked to Buckley, in Colorado, a military Air Force base that houses approximately 10,000 military personnel, as well as the 460th space wing of the US Air Force Space Command.

The Space Based Infared System that will alert the US to the launch of ballistic missiles is expected to be operational before the end of 2011.

Its looming completion and the fact that the site has been cloaked in such secrecy has naturally sparked a wave of criticism. That criticism has come from many quarters – not only come from the usual peace and anti-war campaigners.

Environmentalists and walkers of the area have had their pretty morning walk through the Yorkshire countryside infinitely spoiled with the erection of “star wars” inspired golf balls that are a blatant symbol of war and destruction. Local taxpayers also wonder if they have contributed to the $10 billion required to complete the project. Finally, there are many others who fear that space is in danger of becoming militarized.

Perhaps most worryingly are the concerns those that wonder how the NSA gets away with running such a top secret US military site in the UK – further evidence of the UK being an ‘eternal lackey’ to the US.

Doesn’t the UK Have a “Right to Know”?

“I find this disturbing to say the least. It’s as if they are saying this is a place in the US and you are foreigners. But hang on a second; this is a bit of Yorkshire. We have no idea what they are doing. If they are developing star wars we have a right to know.”

It has been suggested that the work at Menwith Hill, which is run by the US National Security Agency, is so top secret that even the UK government has little idea what is going on.

How typically ‘British’ is that?

There is major US secret intelligence being conducted on British soil and the government barely knows what is going on there.

“If the position was reversed and there was an RAF airbase in Massachusetts, can you imagine the American military saying ‘You do what you like’?” continued Hamilton.

The US military refer to the ‘golf ball’ encased satellite systems in North Yorkshire as “full spectrum dominance of land, sea, air, space and information”. I would be inclined to refer to the Menwith Hill project as being evidence of the US having “full spectrum control” over the UK.

US Influence and Control over the UK 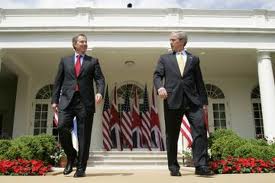 The political, economical and military influence of the US has long been prevalent in the UK and was brought to the limelight in 2007 when ‘steadfast allies’ – President Bush and Prime Minister Tony Blair – stood side by side in the Rose Garden of the White House, defending their decision to go to war in Iraq and to remain there, despite plunging their own approval ratings.

It was a decision that eventually led to Tony Blair’s political demise, and although it may not seem to have much relevance in this story, is also proof of how ‘influenced’ and ‘starry-eyed’ the UK can be towards the US.

The National Security Agency (NSA) and its eavesdropping mission gets away with having a top secret system that intercepts communication from around the world on one of the most ‘retrograde’ counties in the UK because of its power – especially over the British Tory government, which is clearly an ‘eternal lackey’ to the US.

An important national security concern of the UK government should be that the presence of such highly secretive US technology at Menwith Hill is likely to heighten the risk of a pre-emptive attack on the UK as a means of disabling America’s missile-detection system.

Such an event would inevitably rouse further outrage amongst many other people in the UK, not just the sheep farmers of Yorkshire.