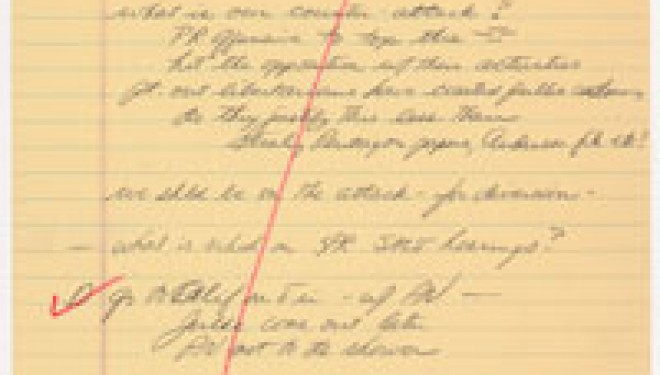 On June 17th, 1972, individuals connected to the Nixon administration were caught breaking into the Democratic National Commitee’s Watergate offices, triggering what would eventually be an all-out investigation and a media circus the likes of which the country had never seen.

Only three days after the arrests, on June 20, 1972, President Richard Nixon met with Bob Haldeman, his chief of staff, to discuss the matter.

The conversation was over an hour – 79 minutes to be exact – and it represented a large bulk of evidence about the break-in and the president’s reaction to it….evidence that would later be erased in a vast cover-up conspiracy.

Exactly 18 1/2 minutes were erased from the secret tape recording Nixon had made of this meeting. There is no way to recover those lost minutes – that part of the conversation between these men is lost to history.

However, even though the tapes were destroyed, there remains a lingering artifact of that moment in history – the hand-written notes taken during that meeting by none other than Haldeman himself.

In the years following the Watergate scandal, many researchers attempted to somehow discover what happened during those eighteen minutes of conversation between the President and his Chief of Staff.

One particular researcher, Phil Mellinger – a former systems analyst at the NSA – originally developed the theory that the conversation during those missing eighteen minutes of tape could be extracted from a complete analysis of Haldeman’s hand-written notes.

The strange technique involved analyzing the actual imprints made by Haldeman’s ballpoint pen onto his notepad paper, and in doing so discover whether or not there could be missing pages from Haldeman’s notes as well.

Even though he had a career with the NSA and as private security expert, when it comes to Watergate Millinger is actually no different than many other conspiracy theorists. His digging into the Watergate fiasco stemmed from a personal interest in the background story, not unlike the reason many other conspiracy theorists across the world get involved in researching the intriguing mysteries that they often become obsessed with.

There is little doubt that Millinger became obsessed with his Watergate research – reading everything he could obtain about the trials, including official reports, books and news accounts. Throughout the years, Millinger has offered speculations about Watergate, including theories that John Dean, White House counsel, was behind the Deep Throat source in a conspiracy to undermine members of the administration.

The Millinger Theory about the “Hidden Pages”

In an effort to prove his theories, Mellinger wanted to uncover evidence that Haldeman’s notes from that June meeting had missing pages. In his first visit to the National Archives to examine Haldeman’s actual notes, Millinger reported:

“Immediately I could see what had happened. The first page tracked with the first four minutes of the meeting, when Nixon and Haldeman didn’t discuss Watergate. The top of the second page referred to a ‘PR program,’ and the notes seemed to correspond to a conversation about how the White House could attack political opponents looking to exploit the Watergate break-in.”

In order to prove to the world that there were missing pages in Haldeman’s notes, Mellinger came up with the idea to conduct analysis on the writing using electrostatic detection analysis. This is a forensics approach that can determine the details of indentations in paper made by writing on the pages above it in a notepad or notebook.

Mellinger had his hopes raised after he suggested the technique to National Archives forensics experts. The Archives agreed to conduct testing on the notes. No doubt Mellinger, like the many Watergate researchers before him, was anticipating taking his place in the hall of fame for investigative journalism.

Unfortunately, that day would never come.

The Results of the Archives Analysis

Just this week, on Thursday, June 16th, the archives released a press release with the results of its forensics analysis on the Haldeman notes.

The National Archives release reports that it had received the 2009 request from Philip Mellinger to conduct a forensic analysis on the notes in order to uncover evidence proving that there were additional notes in addition to those currently housed by the National Archives.

These laboratories went above and beyond the tests suggested by Philip Mellinger. These included hyperspectral imaging, electrostatic detection, and video spectral comparison examinations.

What were the results of all of these tests (which were, by the way, conducted using tax-payer dollars)?

“The results of these efforts did not reveal or recover additional content regarding H. R. Haldeman’s 11:30 A.M. meeting with President Nixon in the Executive Office Building on June 20, 1972”

Like so many conspiracy theorists before him, filled with anticipation and dreams of making a significant discovery about the Watergate scandal, Philip Millinger has had his hopes dashed upon the rocks, thanks to the scientific process.