There are more than 2 million Americans in jail today, yet you don’t often find a critical look into the failures of our justice system on the front page news.

In fact, the vast majority of crime reporting in this country makes a mockery of everything justice is supposed to be.

How many times do you see the mug shot of a minority followed by self-congratulating quotes offered up by the Police spokesperson?

Such conviction in the press opens up the doors for an actual conviction, whether justified or not.

Thanks to an overworked population of public defenders and a preponderance of corrupt judges – who in some cases don’t even bother to read a case or examine evidence before handing down a ruling – justice is not being served, and accountability is lacking in a big way.

Consider the FBI’s 1980 Operation Greylord. Agents posed as prosecutors and defense lawyers that bribed judges. The judges’ offices, in some cases, were bugged and the results led to the prosecution of more than 90 judges, lawyers, court personnel and police officers.

The investigation spanned 42 months and uncovered a wide-ranging network of corruption within the Cook County, Illinois justice system.

The corruption continues. Here is a look at some of the most corrupt judges in modern history.

Maloney was one of several judges caught up in Operation Greylord. He was caught in the act of taking bribes and even rigging murder cases.

He fixed a confirmed four cases, including a murder case, and obstructed justice during the investigation into his crimes. One of the bribes he pocketed came from political insiders with connections to the On Leong crime family. Maloney promised a not-guilty verdict for the ruthless hit man Lenny Chow.

Former Florida Judge James Henson was tossed from the bench in 2005 when he advised a manslaughter suspect to flee the country rather than face the wheels of justice Hanson himself was chosen to uphold.

The case involved a drunk-driving death. A judge taking on a criminal defense client is a big no-no, but advising said subject to haul-tail out of the U.S. – that’s just taking corruption to a whole new level. 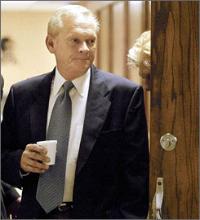 He ended up being sentenced to four years behind bars after evidence was collected from under his desk and the surrounding carpet.

Maryland Judge Richard Palumbo ruled to lift a restraining order against the man who would later douse the woman who requested the order with gasoline and set her ablaze. Yvette Cade was gravely injured and disfigured.

Palumbo ignored her pleas, which were documented on tape, and released Cade’s husband from the protective order. Roger Hargrave would go on to commit the unspeakable act of violence against Yvette. Palumbo was subsequently removed from hearing domestic violence cases.

Pennsylvania Judge Mark Ciavarella is yet another man of the robe convicted of taking kickbacks. He and another Scranton judge accepted millions in kickbacks in exchange for sentencing teens to private industry juvenile detention centers.

Ciavarella and Judge Michael Conahan sentenced more than 5,000 teens to detention centers, regardless of the nature of the crimes, or whether the kids were even guilty at all. The worst kind of judge-for-sale is one that targets kids.