Despite the obvious evils that Nazis inflicted on the world, behind closed doors doctors and scientists were conducting some of the most abhorrent and disturbing experiments on human subjects.

According to NOVA, there were 30 such Nazi human experiments performed on concentration camp prisoners.

The result was unimaginable pain, mutilation, disability and ultimately death.

During the Nuremberg doctor trials, 15 of 23 defendants were found guilty of unthinkable war crimes.

Here is a list of the most shocking and evil experiments that you may not have ever heard about.

Nazi doctors submerged victims in vats of icy water for periods of up to five hours in an attempt to find ways to treat German pilots forced to eject into icy ocean water. The victims were either naked or dressed in aviator suits and submerged in water. Others were taken outside into the freezing cold and strapped down naked.

The infamous Dr. Josef Mengele experimented on twins in an effort to learn the secrets of multiple births and to find a way to quickly multiply the German race. Mengele’s experiments were performed on prisoners at Auschwitz. He experimented on 1,000 pairs of twins. Roughly 200 survived those experiments. When twins were of no more use to Mengele, he’d dispatch subjects with an injection of chloroform straight to the heart.

Other Nazi doctors wanted to see if some people had a natural immunity to tuberculosis in order to develop a vaccine. Dr. Kurt Heissmeyer injected the tuberculosis bacteria directly into the lungs of his victims at the Neungamme concentration camp. He was responsible for the deaths of at least 200 people.

Nazis subjected 52 concentration camp prisoners to Phosgene gas in an attempt to find an antidote to the compound. Phosgene was used as a biological weapon during WWI. The Nazis intentionally exposed victims to the gas, causing unbearable irritation in the lungs. Many prisoners, already malnourished and weak, suffered further complications after the experimental exposure, and four died.

The Nazis wanted to know if a person’s joints and limbs could be removed and transplanted into someone else. These cruel experiments led to scores of concentration camp prisoners having limbs needlessly amputated. Every attempt to transplant a limb or joint was a failure. Many were killed, mutilated and exposed to excruciating pain. Sections of muscle, bone and nerves were also removed in fruitless attempts to regenerate those body parts. 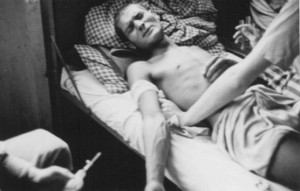 Infamous Nazi doctor Hans Eppinger tried to make seawater drinkable, but failed. Scientists forced about 90 Gypsies to drink only seawater, and deprived them of all food or fresh water. The victims reportedly licked a freshly mopped floor just to get a small amount of fresh water. Serious bodily injury resulted from these horrible experiments.

The Nazis also used poison to torture and kill inmates. At the Buchenwald concentration camp, Russian prisoners were injected with experimental poisons as scientists worked to develop new methods of execution. One was a combination of phenol and cyanide.

Other experiments included adding toxic chemicals to food or shooting prisoners with poison bullets. Those who didn’t die during the experiments were murdered so that an autopsy could determine what impact the poison actually had.

The notorious Heinrich Himmler himself ordered a Nazi doctor to artificially inseminate concentration camp prisoners though various experimental methods. Dr. Carl Clauberg artificially inseminated about 300 women at Auschwitz, who were strapped down and taunted mercilessly. Clauberg told his victims that he had used animal sperm to create a monster inside of them.