China Checkbook Morality Is A Sign of Her Moral Decay 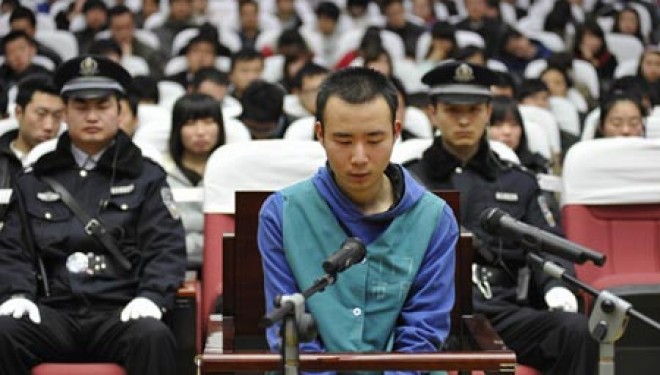 “No big deal, a million yuan will suffice to settle the case.” – Su Xiuwen’s husband is quoted to have said to Su after she, in a fit of anger, rammed her new BMW into a throng of poor Chinese citizens, killing one and injuring twelve.

Living in china, it would seem, gives one an unfettered glimpse at a society on the verge of moral collapse. Each day, while thumbing through the newspapers or surfing the net, one can see the values of traditional Chinese society shredded by the lure of the modern, the different.

Numerous examples of modern inhumanity – such as toxins added to food, corrupt officials abusing human rights, land illegally stolen, the killing of accident victims – all done in the name of making or saving a buck.

In this update, I will attempt to further dissect China’s moral crisis.

Getting Away With Murder – The Case of Su Xiuwen

At about 10 in the morning, on a cool October day in 2003, Dai Yiquan, a poor Chinese street vendor, was driving his push cart to work.

The man was in no hurry, as it was just another day, where he would stand for ten to twelve hours and sells items from the back of his cart in an attempt to provide for both himself and his wife.

What happened next changed the poor man’s life forever. As Mr. Dai drove by a parked BMW, he swerved from the path of an oncoming vehicle. In so doing, he accidentally made contact with and scratched the new BMW.

The car’s owner, Su Xiuwen, outraged by the man’s actions, quickly left her vehicle and allegedly began to strike Dai until local street vendors interceded. Su then allegedly shrieked that she would kill the man, and hopped behind the wheel of her now scratched BMW and proceeded to drive into the mass of vendors surrounding Dai, injuring 12 and killing Dai Yiquan’ wife. Su’s husband, an affluent man with connections high atop the communist party, hurried to the scene to comfort his wife and allegedly was overheard to have said that her actions were “No big deal, a million yuan will suffice to settle the case.”

Truer words were never spoken. At a trial plagued by miscues, a lack of eyewitness testimony and what some would call barely a semblance of legality, Su was never convicted of murder. On December 20, 2003, she received a two year sentence, with a three year reprieve.

The city of Harbin China, where the death took place, was outraged with the decision.

Many said that Ms. Su’s father-in-law, the third highest Party Member in the area, pulled strings that allowed her to get away with murder.

In a closed trial where no witnesses were called and little to no evidence was presented, it seemed as if she had done just that.

“No big deal, a million yuan will suffice to settle the case.”

Was her husband right? In the new China, can a life be quantified in terms of RMB paid out to the poor or less fortunate?

Just as the toxic milk scandal showed us, was this just another case of the powers that be in China allowing for the privileged to get a pass, as it were, and to flaunt the laws? Or was it something else?

Was this incident a glimpse at the new morality problem confronting modern China? A country who – through break-neck growth – now has the second most billionaires in the world, and a gini coefficient that is alarmingly high.

Is the story symptomatic of rules by which the Chinese play nowadays, putting a monetary figure on life and avoiding the consequences?

Li Qiming is another example of China’s moral decay at work. On the exact same day as the Su Xiuwen case, only  seven years later, 22 year old Li Qiming was driving on the campus of Hebei University while intoxicated.

Li Qiming was apparently too inebriated to notice the two college students rollerblading in the streets and ran into them. Li killed one and injured the other.

Unconcerned with what had happened, Li did not offer assistance to the fallen female students, but drove on to the dorm of his girlfriend.

Upon hearing the news of the accident, a small crowd gathered to assist in catching Li Qiming. When the police eventually were able to corral and subdue him, far from being remorseful, he belligerently cried out “Go ahead, sue me if you dare. My dad is Li Gang!”

The bold actions of the son soon shed light upon the value of a life in China, and the power of the privileged. Li Gang, the father Li Qiming, held one of the highest positions in the local Public Security Bureau.

Apparently, young Mr. Li had learned that his father’s position of power was his free pass to do as he wished, with little or no consequences for his deeds, no matter how atrocious.

The Chinese citizenry are getting fed up with a system where the affluent and well connected lead a life of impunity, where little to no harm will come to them, irrespective of their actions.

A flurry of activity ensued after the “My Dad is Li Gang!” case.  The meme “My dad is Li Gang” became synonymous in China with a new breed of Chinese morality, whereby the affluent or well connected often are not held responsible for their actions.

To the Chinese, what Li Qiming stood for was the abhorrent lack of a moral compass that seems pervasive of the affluent and/or well-connected families in China.

Moved to action, the Chinese BBS’s were full of posts about the story. In an attempt to draw Beijing’s attention to the problem, items such as poems were being written, using the phrase “My dad is Li Gang” and then were passed from citizen to citizen.

The Communist Party Crushes the “Hype”

In typical China fashion, the communist party moved to squelch the story, as Li Gang was in fact a powerful Communist within the government.

Actions taken by the party, ie attempts to squelch the story, only served to anger the citizenry even further.

On October 29, it was reported that the Central Propaganda Department of China had ordered that there was to be no more “hype” about the incident of Li Qiming, and ordered all reporters to vacate the area of the crime in Hebei.

Even the attorney for the deceased was allegedly told to cease his representation for the family, and the Beijing Bureau of Justice allegedly cautioned his firm on the matter.

Subsequent actions taken by the communist party led to outrage and a sense of powerlessness by the masses. By the time the case was settled, the value set upon the female student’s life had eroded to U$69,900, and Li Qiming was sentenced to only six years in jail.

While drunken driving is a problem in China – which incidentally owns the most dangerous streets in the world – it is certainly not a China-specific problem.

What does seem to be China-specific, however, is an erosion of morals by the powers that be, which has led to an all out scramble to ‘getting one’s own’ or taking care of oneself, at times to the major detriment of others.

This morality crisis also seems to have been a driving force in the on-going use of poison in milk, fish, chicken and other goods, all in the name of making a fast buck.

The reckless actions of the monied could explain the general moral decline one finds in China. In a country where one seemingly can purchase safety from justice, why shouldn’t they do as they wish?

Some would point to the recent case of Yao Jiaxin, who was executed for running over a woman and then upon seeing that she had not died in the collision, repeatedly stabbed her, as he thought she would be ‘hard to deal with’ about the accident.

Some may say that the party, by this particular action (executing Yao Jiaxin), is in fact attempting to instill values into society.

I would counter that the killing of Yao Jiaxin was a sop – an attempt to placate the masses. His father, lacking the communist party credentials, did not wield the power of Li Gang or Ms. Su’s in-laws.

For, if this were not the case, then why do we see such blatant acts of disregard for law and human life in China? Why, in Jiangsu China on a September morning in 2010, did a man driving a BMW run over a child four times, and then walk away as if he had done nothing wrong? (See China Daily Youtube Video)?

Could it be that due to his status, he had done nothing wrong, as his bank account had allowed him to purchase a different set of morals?

Even more recently, there have been at least three similar events across China all involving a car, a murder and a getaway. In two separate instances, after hitting a pedestrian and then after seeing that the pedestrian had lived, the driver intentionally ran over the body again in order to kill them.

In a case in northeastern China, a man – after seeing he’d hit someone with his car – quickly moved from his vehicle and doused the victim in gasoline, and burned them alive.

It is often from an uniformed perspective that we generalize, that we overstate a simple fact. The argument that China has many more people and thus should be prone to such events would be a common counter argument.

The problem with that statement, however, is that in China, less than seven percent of the people own cars. Even if this were not true, the attitude of those caught doing something wrong is alarming, at the very least.

Absolute power corrupts absolutely, and the people of China often see that corrupt officials, through the virtue of their positions, have redefined the moral standards.

In a country where the value of a soul can be counted in bank notes, what is left?