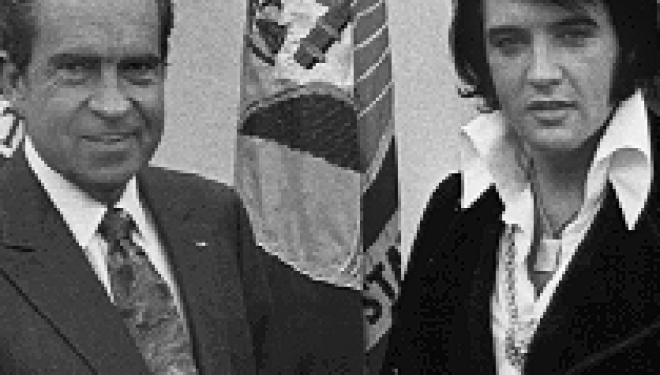 According to the National Security Archive, out of the thousands of reports, files, and photographs, one set of items gets requested more often than any other. It’s probably not what you’d expect.

The website states, “That item, more requested than the Bill of Rights or even the Constitution of the United States, is the photograph of Elvis Presley and Richard M. Nixon shaking hands on the occasion of Presley’s visit to the White House.”

This meeting took place on December 21, 1970 at the request of Presley himself. The King of Rock-and-Roll requested to be made a “Federal Agent-at-Large” in the Bureau of Narcotics and Dangerous Drugs.

Below are some of the more interesting images the site has to offer.


The Handwritten letter from Elvis to Nixon requesting the meeting.

The initial meeting between Presley and Nixon. Notice how the “King” does not even remove his sunglasses in the presence of the president. Also, he is carrying several gifts for the President. One of which was a Colt 45. However, it seems that Presley is more proud of the autographed photo of himself.

Nevertheless, it seems that Nixon was just as impressed with the autographed photo, too. It seems that the president also took a shine to Elvis Presley’s cufflinks, too.

Overall, it appeared to have been a pleasant meeting for both Presley and Nixon, as indicated in Nixon’s thank you letter.

Even though both parties enjoyed the meeting, the White House was not sold on Presley’s appointment. One memo suggested that the president was seriously concerned about the singer’s credibility. While in another memo, when it was mentioned that Elvis would be a good ambassador between the White House and America’s youth, someone hand-wrote in the margin of the document, “You must be kidding.”
To view the other photographs are to read the documents that chronicle the meeting, visit the entire National Security Archive collection.