From prehistoric Stonehenge in Britain to ancient Mayan buildings of Tikal in Guatemala to the 15th century Incan Macchu Picchu in Peru to the recent completion of the largest solar-powered building on earth at Dezhou, China, people have found ways to blend the terrestrial with the extraterrestrial through architecture.

As happens more frequently in archeology than you might expect, a discovery has occured right under the noses of millions of people, not hidden off in a distant jungle.

This latest astro-architectural find is in Rome’s Pantheon: a temple to all of the ancient Roman gods.

However, it was damaged in fires that struck Rome between 60 and 110 A.D. and then rebuilt.

The current structure that has lasted 18 centuries is from a building project by Emperor Hadrian : the far-traveling emperor perhaps best known these days for setting up a wall of stone in Britain to “keep the barbarians (northern Britain) from the Romans” or, more likely, to fill coffers with duty collected at the border.

Michelangelo, the great painter of the Sistine chapel once described the design of the Pantheon as an “Angelic and not human design.”

Essentially, once past the remarkable bronze doors and marble columns, it is a dome with a 30 foot wide hole, or oculus, in the center of the roof. It is an impressive example of architecture for many reasons.

For instance, even without the use of reinforcing steel rods and having been built on marshy earth, the concrete dome has lasted millenia. In more recent centuries, Italian kings, the painter Rafael, and others were entombed there.

However, beyond the impressive construction techniques, new evidence indicates that the building did more than house statues and tombs. 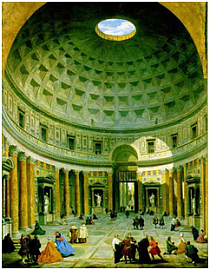 A historian of ancient architecture from Politecnico di Milano and a classics scholar from the University of Otago in New Zealand has discovered that at precisely midday during the March equinox, the beginning of the new Roman year, a round shaft of light shines through the oculus and illuminates the Pantheon’s entrance.

Giulio Magli and Robert Hannah stated that the precise calculations made in the positioning and construction of the Pantheon mean that the size and shape of the beam matches a semicircular stone arch above the doorway perfectly.

Another lighting effect can be viewed on April 21when the midday sun strikes a metal grille above the doorway, saturating the courtyard outside with light.

The Romans celebrated April 21 as the founding date of the city, and the impressive light show could have been seen as something that, in effect, raised their emperor to the level of the gods and invited him in to join them.

“The emperor would have been illuminated as if by film studio lights,” said Professor Magli. “The Romans believed the relationship between the emperor and the heavens was at its closest during the equinoxes. It would have been a glorification of the power of the emperor, and of Rome itself.”