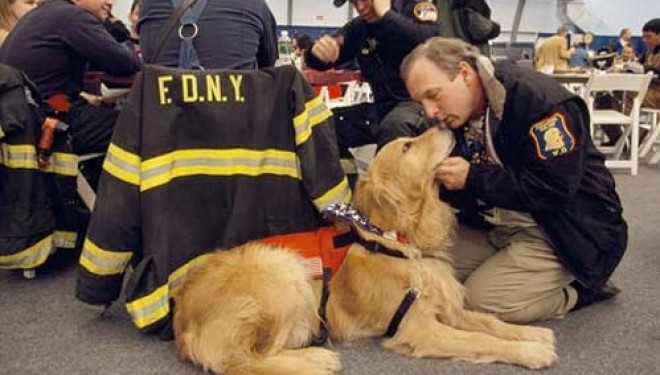 September 11 was not only a time to honor the human heroes, but the animals who serve and protect us every day.

Earlier this month, the American Humane Association paid tribute to the the hero dogs of 9/11 during a New York gala.

Photographs by photo-essayist Charlotte Dumas, whose portfolio of heroic dogs recently appeared in The New York Times, was also at the event.

“American Humane Association has been working for 134 years to protect children and animals—the most vulnerable among us — from harm, abuse and neglect,” said Robin R. Ganzert, President and CEO of the organization. “On 9/11 we were all vulnerable. Heroic dogs gave us their special skills and used their special senses in service to values that define American Humane Association and bind us as Americans: a reverence for all life and compassion that can create a kinder world.”

It will also feature Rachel McPherson, CEO of the Good Dog Foundation, whose dog, Fidel, served as an Animal-Assisted Therapy dog to bereaved families.