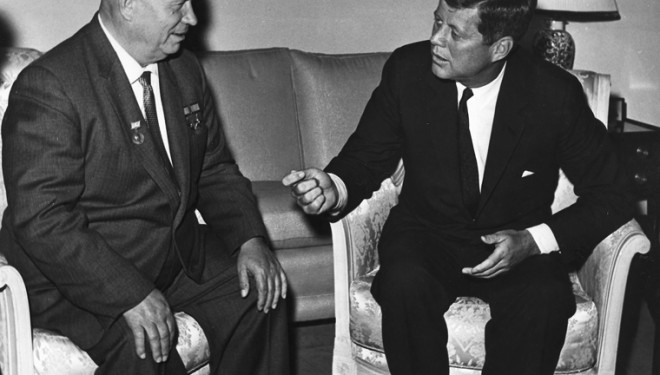 During the summer of 1961, the United States faced its last major incident of the Cold War.

The incident, which would become known as the Berlin Crisis of 1961, was the result of U.S.S.R Premier Khrushchev’s threat to sign a peace treaty with East Germany that would effectively end the existing four-power agreements guaranteeing American, British, and French access rights to West Berlin.

These powers clearly stated that no unilateral treaty could annul their responsibilities or rights in West Berlin, including access to the city.

As the crisis escalated, the U.S. created a secret contingency plan in the case of a possible confrontation over West Berlin with the Soviet Union.

It was during this period that the Berlin Wall was built, officially known as the “Anti-Fascist Protection Rampart.”

Since then, U.S.S.R eventually dissolved, and East and West Berlin are no longer divided. However, oddly, the documents that make up Project Poodle Blanket are still classified.

In a Defense Department’s letter to the National Security Archive, it is stated that the documents that make up Poodle Blanket are still classified because “they would reveal actual U.S. military war plans that remain in effect,” “seriously and demonstrably impair relations between the United States and a foreign government,” and “seriously and demonstrably undermine ongoing diplomatic activities of the United States.”

Lingering Issues from the Cold War?

Do these answers point to remaining issues left over from the Cold War?

Apparently, the U.S. government did not think so years ago when it declassified NSAM 109 and published it in the State Department’s historical series, Foreign Relations of the United States.

NSAM 109 described actions that would be increased in severity. Such actions ranged from small probes to test Soviet intentions, to non-combatant action, and then non-nuclear military action.

NSAM 109 also stated that if no other course of action was left, then the U.S. would allow for the use of nuclear weapons, from “selective nuclear attacks” to “general nuclear war.”

The argument is that if NSAM 109 went as far as projecting a global nuclear war focused on the Soviets, then what could be so damaging in the documents pertaining to Poodle Blanket, to keep the documents classified today?

According to the National Security Archive: nothing.

In an update about the decades old request, William Burr at the National Security Archive stated, “Keeping information on ‘Poodle Blanket’ a secret today shows how obsolete the Pentagon’s security guidance is.”

Yet, is it truly obsolete?

Officially, the Cold War is over. Germany is once again whole. However, there are nearly 60 U.S.military installations throughout Germany today. The country is also home to seven NATO installations.

Though the Cold War is officially over, there may be something in the Poodle Blanket documents that remain in effect today. This theory is neither confirmed nor denied by the U.S. Department of Defense.

Also, U.S. and Russia have clashed several times since the Cold War. The most recent disagreement was over Russia’s military action in Georgia.

Again, could there be something still in effect today that concerns U.S – Russian relations? The Department of Defense has not made any comment on such a suggestion.

According to the National Security Archive:

“It is unlikely in the extreme whether any U.S. security interest would be jeopardized by the long-delayed declassification of those documents.”

The National Security Archive has appealed the denied request and is, once again, trying to get those documents declassified. However, for now, the American public will just have to wonder, What is in Poodle Blanket?