The Tragedy of the Chiapas Human Rights Case 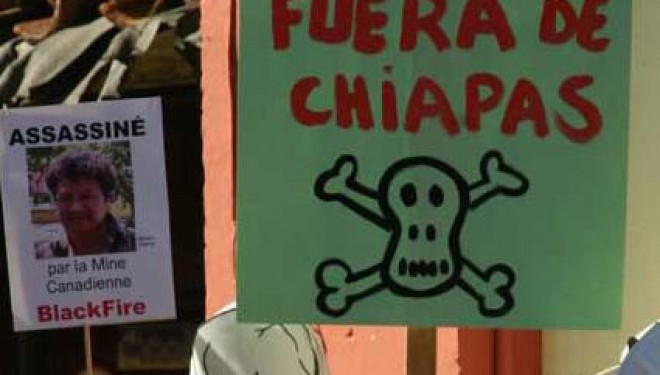 The mining industry in Chiapas, Mexico continues to exploit the indigenous people of the area while stripping the land of its resources.

In 2007, Blackfire Exploration Ltd, a Canadian company, started work on the world’s largest barite mine. So far, at least 200 indigenous families have been removed from their lands and reallocated in other areas all but worthless in terms of agricultural opportunity.

The mines are not providing much of an opportunity for the indigenous people of Chiapas either. Of the 200 families forced to leave their land, the mining giant has employed only 25 men. And even then, they end up working in dangerous conditions for about $9 a day.

As work on the mines continue, communities face a severe shortage of clean water and are forced to deal with increasing pollution.

The sorry conditions in Chiapas are in stark contrast to the promises Blackfire made when the company was lobbying for the mine in 2006.

Blackfire, a mining company owned jointly by Canadian and Mexican interests, claimed the mine would provide an economic boom for the people of Chiapas without drastic environmental impacts.

The company said the barite mine would increase Mexico’s financial strength as an exporter. The country currently imports barite from China and India.

Furthermore, Blackfire claimed, the mine would provide employment and social welfare programs to area natives. Blackfire also promised to improve infrastructure with roads, electricity, schools, sewage and clinics, according to a report by the organization 54Pesos.

Such lofty promises made it easier for Blackfire to visit villages in Chiapas and convince families there to sell their land. Blackfire Says It Will Keep Promises

The company still denies the accusations that families were relocated to substandard land, unsuitable for farming and lacking clean water.

Blackfire also insists more employment opportunities and better infrastructure will be provided once the mine fully opens and starts bringing in more money.

The people of Chiapas have yet to see that promise come to fruition and now, several non-governmental organizations have stepped in to help the indigenous people secure better conditions. These organizations are helping to educate people about the true impacts of Blackfire’s presence as well as the environmental and socioeconomic impacts of the barite mine.

There’s a lot of work yet to do, but with more assistance from NGOs and academic organizations, the people of Chiapas could finally see some of those promises fulfilled.

Of course, that will require major concessions from Blackfire.