How Electronic Warfare Is Redefining the Battlefield

Today, more than ever before in the history of the world, electronics are fast playing a central role in military warefare.

The ominous sounding laboratory is actually a facility intended to fine-tune the electronic warfare capabilities of the F-35 Joint Strike Fighter.

This is one example how one heavily just one branch of the military is investing in the field of electronic warfare. The Air Force defines the field as “the use of electromagnetic and directed energy to control the electromagnetic spectrum or to attack the enemy.”

That is a very broad description that actually encompasses a dizzying range of potential applications in military as well as intelligence.

While in years past the extent of electronic warfare encompassed little more than systems that would help a jet fighter evade incoming signals or jam targetting systems of ground forces, newer weapons are being built that are more of the offensive end of the spectrum.

The Army’s FM 3-36 Manual titled “Electronic Warfare in Operations” describes the need for control of the electromagnetic spectrum on the battlefield and explain how commanders need to accomplish that task:

“They do this by locating, targeting, exploiting, disrupting, degrading, deceiving, denying, or destroying the enemy’s electronic systems that support military operations or deny the spectrum’s use by friendly forces”

Examples provided in the manual of electronic warfare include:

–> Using directed EM or directed energy, or antiradiation weapons to proactively attack enemy locations to take out the enemy’s ability to utilize the electromagnetic spectrum at all.

–> Outfitting military communication equipment with defensive gear that can block a similar EM attack from the enemy.

–> EM Jamming, antiradiation missile, flares and decoys, and even an element of weaponry referred to as only “electromagnetic deception”.

Electromagnetic deception – an interesting term – is defined in the Army manual as manipulating electromagnetic energy in some way that will mislead the enemy or their EM weapons.

Some examples of this include providing misleading signals to the enemy, simulating “friendlies” or fake hostile forces, or transmitting EM signals that mimic the enemies own signals. 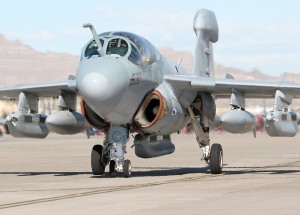 Other Uses of Electromagnetic Weapons

An impressive use of electromagnetic weaponry on the battlefield was described in a February 2011 report in Popular Science, where a new device developed by Felix Vega and Nicolas Mora – two doctoral students from Switzerland – was used to set off an IED from 65 feet away.

The device accomplished the task by rapidly sending electromagnetic pulses toward the device, and once hitting the same frequency as the remote device that the enemy uses to set off the bomb, the device explodes. This is a form of electronic warfare that can actually save the lives of countless soldiers.

On the flip side, you’ve got slightly more offensive weaponry that can completely disable enemy communications. One example is the U.S. Navy’s EA-18 Growler, which was used over Libya throughout the early part of 2011 to bombard Moammar Kadafi’s ground radar facilities with electromagnetic noise, making those weapons completely useless to the enemy.

Satellite Hacking by the Chinese

While the U.S. military takes great pride in its electronic warfare capabilities, there is the other side of the coin where nations like China seek to dismantal that electronic advantage through hacking and other countermeasures.

One example came on October 27th, when Business Week reported that Chinese computer hackers were suspected of interfering with U.S. government satellites from 2007 through 2008.

Oddly enough, the satellites in question were only observation satellites used for climate and terrain, however the fact that the Chinese established the ability to accomplish the task was very disturbing to most observers. If you can interfere with a satellite’s signals, then you could potentially disable that satellite as well.

Of course, China denies the charges and claims that the activities are simply a symptom of rampant cyber crime taking place throughout china, and the Chinese authorities promise U.S. officials that they will work harder to “clamp down on cyber crime.”

However, the entire episode is just one example of how high the stakes are these days when it comes to electronics, communications and the entire electromagnetic spectrum over the entire planet.