Just How Much Does Former Spy Rosenberg Reveal In His Book? 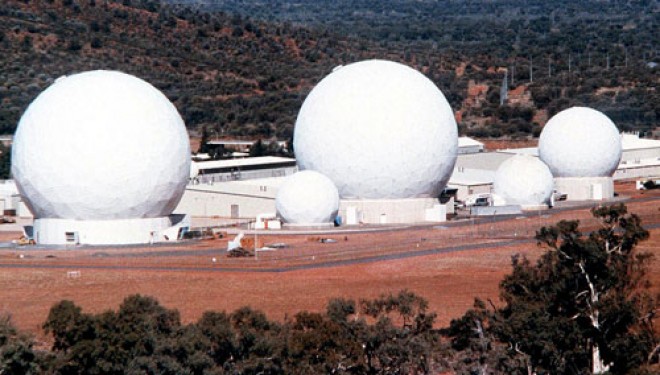 This past summer, Hardie Grant Books released David Rosenberg’s Inside Pine Gap: the Spy Who Came in from the Desert.

Rosenberg was employed at the Joint Australia-American Defense Facility known as Pine Gap in Alice Springs for 18 years.

According to his author’s bio, Rosenberg’s expertise was in signals intelligence and how it related to military weaponry.

His main job duty was to identify, analyze and report the military capabilities of countries that posed potential threats to the US and Australia.

Pine Gap is a first-hand account of the author’s experience while employed at the satellite tracking station of the same name.

The facility employs more than 800 workers and consists of a large computer complex and eight radomes. Radomes, or radar domes, are structures that protect the radar antennas from the elements, as well as the prying eyes of the public.

This facility is one of the largest ECHELON ground stations. Not only is Pine Gap well-guarded, but it is also the only area in Australia that is designated as “prohibited” airspace.

Rosenberg worked at the facility from 1990 through 2008. His career spanned the end of the Cold War, two wars in Iraq, and, more recently, the War against Terror.

He worked under the administration of the three separate presidential administrations. If anyone knows the ins and outs of Pine Gap, it would be Rosenberg.

Unfortunately, the book does not reveal much about the facility itself. Much of what Rosenberg worked on and saw at the facility is still considered classified. On Readins.com.au, Rosenberg describes his dilemma, “The NSA and other intelligence organizations became alarmed at what I might reveal.”

On top of the NSA’s dismay at the news of Rosenberg’s book, he also states, “I was under a lifetime agreement with the Agency to have all written material screened prior to publication.”

So everything in Rosenberg’s book has been approved by the U.S. and Australian Governments.

With that in mind, Rosenberg was allowed to reveal quite a bit. The author tells the Australian Jewish News that his book focuses on how normal life was behind the guarded doors of the secret facility. To Rosenberg, and most of the other 800 employees, it was just another day at the office.

An interesting fact about the book is that the author chose address the subject of aliens.

He explains that decision to the Australian Jewish News:

In the book I only devote about two paragraphs to aliens. That was really all I felt that topic deserved, but I did touch on it simply because it’s part of the history; and also to dispel any theories that people might still have about aliens at Pine Gap.

Rosenberg contends that his main reason for writing the book is not to divulge any top secret information, or to blow the whistle on any governmental wrong-doing.

Rather, his goal in writing Pine Gap was to reveal the relationship between Australia and the United States, along with how both countries ultimately benefit from that partnership.

Even though the book does not reveal any government secrets or conspiracies, it is getting rave reviews from its readers. Readers are calling the book “insightful” and “fascinating.”

Even though the book is not a thrill-a-minute novel like those of Ian Fleming or John le Carre, it does give the reader an inside look at the day-to-day life of a tech spy, and the process of intelligence gathering.

However, Rosenberg does seem to try to pique the readers’ interest with explanations and attempts to dispel myths or rumors.

You can purchase a copy of Rosenberg’s book at Amazon, or read more about the book at the publisher’s site, Hardie Grant Books.