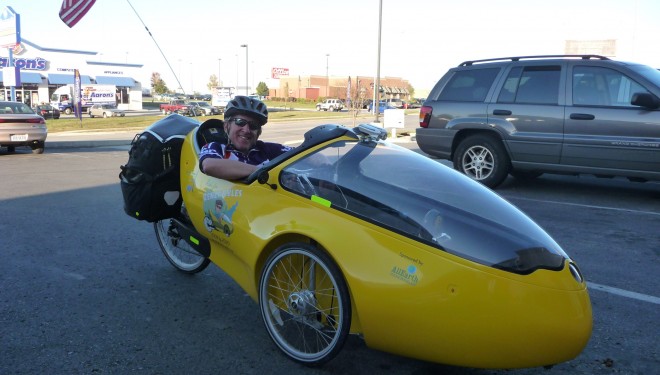 Weis is making the 1700-mile trek to protest the TransCanada Keystone XL pipeline. The tour will follow the exact route that the proposed pipeline is expected to follow.

Weis’ pedaling protest is an effort to draw attention the environmental impact the pipeline could have along with what he calls, “interests that are running our democracy into the ground.”

According to TransCanada, the Keystone pipeline is a $13 billion project that will run a 36-inch crude oil pipeline from Alberta, Canada to as far south as Texas.

The crude oil will be derived from dilute bitumen from the Athabasca Tar Sands in Alberta, Canada. The company states on their website that the project will:

“…play an important role in linking a secure and growing supply of Canadian crude oil with the largest refining markets in the United States, significantly improving North American security supply.”

Weis, along with many others, believe that this project will do considerable more harm than good.


Tom Weis and a History of Activism

Weis was one of the 1200 people who were arrested last summer in Washington, D.C. during a protest of the pipeline.

Protesters feel that if a leak would occur, it could endanger countless human lives and devastate local ecosystems.

Two areas of greatest concern for protestors are the Sand hills in Nebraska and the Ogallala Aquifer, which is one of the largest reserves of fresh water in the world.

If a leak would occur, it could potentially contaminant the drinking water of 2 million people.

The protesters are not only against the transportation of the crude oil, they are also protesting the extraction of tar sands altogether.

Physorg.com reported that the Commissioner of the Environment and Sustainable Development stated that due to the lack of information, it was difficult to make an accurate assessment about how mining tar sands affects the environment.

However, despite the lack of a full scientific assessment, it seems that tar sands sludge extraction is the fastest-growing contributor of greenhouse emissions. Furthermore, mining tar sands takes a significant toll on Alberta’s Boreal Forest.