The world is just over a year away from the highly publicized and much talked about December 21, 2012 apocalypse.

As the date draws near, the idea of the world ending in 2012 is becoming much more discussed online, and the many 2012 theories out there are becoming more varied.

Some are related to each other, while others are way out there.

One website that is touting the idea that the end will be here next year is 2012warning.com.

The site takes a spiritual approach to the 2012 theory. The site is authored by Gianna Talone Sullivan, a clinical pharmacist who claims to receive messages from the Virgin Mary that concern the future of mankind.

One such message is that 2012 will mark the beginning of the end.

Sullivan contends that the Virgin Mary told her that Planet X will return from its 3,600 year orbit and ignite Jupiter. Supposedly, Jupiter will burn like a tiny sun; creating two suns in our solar system.

The theory being that the two suns will mark the final countdown to the end of humanity.

In her theory, Sullivan offers a lot of astronomical “evidence.” However, it is a very complex series of cosmic alignments that must take place.

As far as Sullivan’s alignments are concerned, NASA states:

“There are no planetary alignments in the next few decades, Earth will not cross the galactic plane in 2012, and even if these alignments were to occur, their effects on the Earth would be negligible. Each December the Earth and sun align with the approximate center of the Milky Way Galaxy but that is an annual event of no consequence.”

As for Planet X or Nibiru, NASA explains:

“Nibiru and other stories about wayward planets are an Internet hoax. There is no factual basis for these claims. If Nibiru or Planet X were real and headed for an encounter with the Earth in 2012, astronomers would have been tracking it for at least the past decade, and it would be visible by now to the naked eye.

Obviously, it does not exist. Eris is real, but it is a dwarf planet similar to Pluto that will remain in the outer solar system; the closest it can come to Earth is about 4 billion miles.”

It appears that the messages that Sullivan is getting may not measure up. 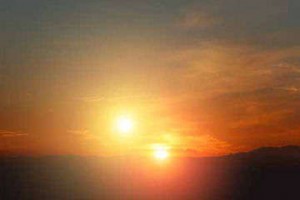 In an undated and uncited article, December212012.com reports that NASA is predicting an unprecedented occurrence of solar storms.

“The current cycle of the sun is projected to be one of the most intense since record keeping began almost 400 years ago. The geomagnetic storms in the earth’s atmosphere in 2012 could have catastrophic effects on the ground here in the Capital District of Albany and upstate New York, with the auroras being a beautiful side effect.”

However, the NASA FAQ sheet does not agree with that theory either.

“Solar activity has a regular cycle, with peaks approximately every 11 years. Near these activity peaks, solar flares can cause some interruption of satellite communications, although engineers are learning how to build electronics that are protected against most solar storms. But there is no special risk associated with 2012. The next solar maximum will occur in the 2012-2014 time frame and is predicted to be an average solar cycle, no different than previous cycles throughout history.”

This is just a quick look at a couple of the sites out there touting that we will die in 2012. However, they do not offer any credible evidence to prove these claims.

When researching 2012 theories, always be sure that the information is from a credible source. As for the question – Will we die in 2012? – the credible sources say that it is highly unlikely that our demise will come at the hand of a rogue planet or solar flare.