American Protests Provide a Roadmap to Freedom for the Chinese People

“America under siege – the horrors of democracy”.

A title such as this could have appeared under any one of dozens of the Chinese reports on the recent protests in New York city and Chicago.

To hear the Chinese media talking about it, America is on the brink of chaos and anarchy, a phenomenon that the U.S. media is allegedly hiding from the masses (1) as it escalates out of control (2).

These same sources were also quick to condemn the fiscal irresponsibility in the US (3), in an attempt at hiding from the recent developments showing that the Chinese people are losing faith in their own government.

Eyeing the events occurring in the US, the Chinese propaganda machine kicked into high gear and wasted little time in vilifying the West and Democracy (4).


The Crumbling of America?

In an attempt at weakening the case for change in China, the Communist-controlled news corps tells the story of a USA practically in ruins. To hear them tell it, one imagines “hoover huts”, throngs of people dying in the streets of hunger, and a third world-like atmosphere surrounding the masses.

As a matter of fact, I have been asked by no less than a dozen Chinese about how bad things are in America, and what we do with all of the poor people.

The Chinese people are being told that all of us have lost our homes due to the housing bubble.

When I inquire about their sources, they blithely reply, “the newspapers”.

Oddly enough, those that are able to travel to America come back with a completely different image. To them, it’s a beautiful place where public facilities have hot water, even in the summer!

What the Chinese Are Hearing

Initially, the Communist party marshaled their resources to report that the events in Wall Street meant that – absent the necessary stern and protective father, ie Communist party, to oversee a country, it would fail.

Drawing upon the wild images of anarchy of the great proletarian revolution- which was oddly enough inspired by the Communist party, the Chinese government proclaims that when people attempt democracy too quickly, bad things happen.

In an effort to bolster their contention, the government hints at the chaos that overtook China after the fall of the Qing dynasty.

They then speak about the ‘peace’ bestowed upon it after the great helmsman Mao united this State.

Interestingly enough, the communists, who at times seem very far removed from reality, seemed to not understand the depth of the ‘need for change’ that the commoner in China feels today.

To the Communists, it would be sufficient to show unrest, and then they hope that the Chinese collective memory would harken back to the chaos and death of the 60’s and 70’s, or even more recently, the incident at Tienanmen, and then feel protected by ‘big brother’ and the security that he provides.

The Communist party plays upon the term ‘harmonious society’ and ‘peaceful development’ – catch phrases for ‘do as we say and we won’t send tanks in to remove you from the streets’.

The Chinese People Are Feeling Hopeless

After years of oppression, they apparently long for a ‘little change’, and envy the ability of Americans to peacefully express their views.

This dramatically came to life for me the other day.

I had Chinese associates visiting my home, one a party member, one the wife of a party member and the other a post-80’s Chinese. Although all of them had lost a family member to either the Mao’ist purges or in the revolution, they all supported Mao.

When news of the “occupy Chicago” demonstration appeared on the CCTV channel, the older duo pointed fingers at the screen seemingly with glee.

“Look! Look!” They said. “There is your America and supposed freedom. America is going to collapse.”

One could almost read their minds – the horrific visions of the storm troopers invading Tienanmen, a time they painfully recalled, as they pictured the same scenario playing out in Wall Street.

“Even in America, democracy cannot stand.”

Shaking my head, I explained that this “mass incident” was probably a good thing – only to be cut off by the youngest of my friends.

She angrily claimed that in America, at least they have the right to protest, her words lingering in the air.

Interestingly enough, the words of Dannie – the post 80’s woman – are widely expressed throughout China, much to the angst of the Communist party and its supporters. 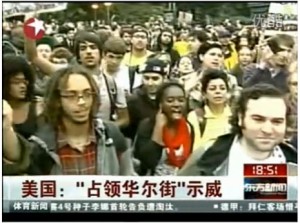 The Chinese People Speak Out

In addressing the protests, one Chinese netizen commented, “If this protest happened in China, the people would be gunned down. Peaceful China.”

This stark look at how the Chinese feel about their government was bolstered by others who said things such as, “Our stock market is a crook.”

Others even went so far as to support a protest on Chinese soil, “If the government does not provide enough for us to live on then why can’t we take to the streets in protest?”

And even: “We support American people’s Wall Street Revolution.”

All of this comes at a time when Beijing is drumming up anti-America sentiments due to the proposed arms sales to Taiwan and the planned RMB currency bill.

But such things are far from the reality, and not part of the major worries of the typical person in the streets of China. Of interest to them are nothing less than the housing crunch, inflation, corruption and problems with what some have called “high speed death”, or China’s subway and trains, both of which suffered from accidents recently.

The Broken Promises of Communist China

The unfortunate issue for most Chinese is the “deal with the devil” pact signed just after the Tienanmen massacre. In exchange for civil peace, the communist party has promised to keep the tanks at bay and provide jobs and an increased standard of living for the masses.

In turn, they expect the “person on the streets” to shut their mouths, and complain about anything but the party. Most of all, do not take to the streets in protest.

However, the tides are turning, as inflation is eating away at discretionary income of part of the 80% of Chinese who, according to the national bureau of statistics, live on less than U$1050 per year (5).

As the Chinese watch more land taken from the poor and redistributed to the rich in a perverse anti-Robin Hood manner, they have grown disenchanted with the powers that be.

In what can only be called one of the most brutal reminders of the what the communist party is capable of, the other day Guo Hijia, a farmers rights activist, ran as an independent against a communist party member and won!  Unfortunately for Mr. Guo, the first independent to be “elected” into the national people’s congress, he was summarily placed under house arrest shortly after his victory.

This is proof that the Communists are good to their word when they said that independents and non state approved candidates would not be allowed to derail the plans of the government.

I guess it is little wonder that the Chinese people are looking to the West for answers.

In rising up against Corporate greed and corruption as the entire world watches, the American people are providing the Chinese people with an example of exactly what they need to do in order to become truly free.