Chicago’s Mayor Rahm Emmanuel’s decision to arrest nurses and medical aid volunteers that were helping injured people during the Occupy Chicago protests, epitomises why activists across America feel the need to protest.

The protests, which began in September in New York City with the “Occupy Wall Street” movement, are principally associated with combating corporate greed and corruption, as well as protecting the constitutional rights of free speech and the right to peacefully assemble.


Blocking the Constitutional Right to Assemble

The action also trampled upon the constitution rights of the public, and exemplified the very essence of what the “Occupy” campaigners are demonstrating to abolish. The harassment and arresting of the nurses has understandably ignited further anger, igniting even greater resentment for the authorities among protesters.

The majority of the ‘Occupy’ protests have been relatively peaceful. The Chicago nurses were involved in assisting several of the protesters in Grant Park in Chicago for minor complaints such as headaches and sprained ankles.

It was while the nurses were helping those protestors in need of medical assistance when the police began to make arrests and detained 130 people for “being in the park after closing”.

Those arrested were then taken to jail where they have described their treatment in custody as being “inhumane”.

Those arrested believe that the shocking situation, including being denied food, a mattress and a phone call, was overseen by the Chicago mayor.

“We were denied our phone calls and were put in jail for speaking for our right, and that is un-American,” Martese Chism told Fox Chicago. Martese was amongst the nurses arrested in Grant Park.

The incident initiated a more intense wave of protests with demonstrators moving outside the mayor’s office in City Hall for the first time since the Occupy protests began in Chicago.

Resentment toward how the nurses were treated in Chicago has evolved well past the boundaries of Chicago, as registered nurses from across the U.S. have condemned Mayor Emmanuel’s decision to arrest the nurse volunteers.

So intense is the rage towards the Chicago mayor among the nursing community in America, that leaders of the National Nurses United (NNU) are rallying support to bombard Mayor Emmanuel’s office and demand that all charges are immediately dropped against those arrested.

Whilst no similar incidents have been inflicted on the nurses based in five other cities in the U.S. where ‘Occupy’ activists have been demonstrating, additional antagonistic behaviour conducted by officials in Chicago included police ripping down a first aid station set up the NNU to provide basic aid for the protestors.

Similar to the other “Occupy” movements, Occupy Chicago has set up a Facebook page.

The page describes Occupy Chicago as being, “A peaceful, nonviolent, non-partisan movement. We are not a leaderless movement, we are a movement of leaders.”

The Occupy Chicago Facebook page has already attracted over 31,000 followers. 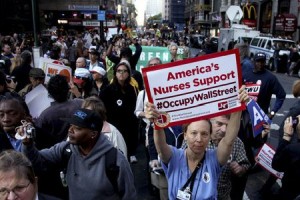 In ripping down first aid stations, arresting nurses for merely carrying out duties, and then denying those nurses the basic human rights, the city of Chicago and particularly its mayor, has inadvertently added additional fuel to the cries of greater social justice amongst the citizens of Chicago and other Americans across the country.

Aside from the other demands that “Occupy” protesters are standing for, the core right all protesters and all Americans demand from authorities is the core right for Americans to peacefully stand up for their rights. Once you start denying that core American right, you are ultimately trampling over the very principles that America was founded upon.