How Agent Orange Led to Ischemic Heart Disease In Veterans 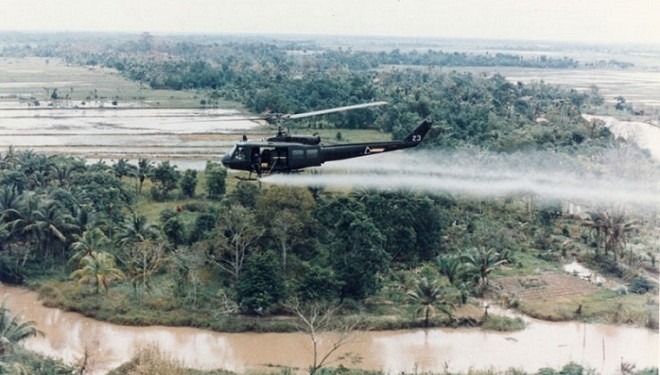 >Agent Orange was a chemical defoliant that was used during the Vietnam War, with the goal of defoliating forested area so the guerrillas would have less cover and a reduced food supply.

Later, it was discovered that the Agent Orange used was contaminated with a dioxin compound called TCDD.

The US sprayed nearly 20 million gallons of this and other similar chemicals, destroying over five million acres of land between 1962 and 1971.

Not only were forests and food crops destroyed, but hundreds of thousands of people were killed or injured as a direct result of these chemicals, including as many as a half million babies born with severe birth defects.

The causalities were not just among the Vietnamese. US soldiers were affected as well.

Some of the effects of this toxic chemicals included cancers, respiratory disorders, skin and digestive issues and many more serious illnesses.

Although nearly 40,000 veterans filed disability claims for a range of health issues with the Department of Veterans Affairs by 1993, only a few hundred were actually ever compensated for their injuries.

Today, TCDD is recognized as the cause of a variety of illnesses suffered by veterans who served in Vietnam.

Sadly, even more proven links to illnesses keep turning up. Forty years after the fact, the VA has finally recognized ischemic heart disease as yet another effect of TCDD exposure.

Unlike in the 70s, however, veterans today are not required to provide proof in order to be compensated for their injuries.

Ischemic heart disease is characterized by a reduced oxygen and blood flow to the heart. Over time, this weakens the heart, making it difficult for the heart to function properly.

Symptoms include a tightness or crushing chest pain that may spread to the neck, jaw, shoulder, arm or back as well as dizziness, light-headedness, and a feeling of indigestion or heartburn.

Thanks to various scientific studies, high exposure to TCDD is now linked to an increased risk of developing ischemic heart disease.

Did US veterans suffer an especially high exposure to this chemical? Absolutely.

Agent Orange was used at a concentration that was 13 times higher than the USDA recommendation for application. Not only was Agent Orange applied by air, but soldiers also sprayed this chemical directly via units carried on their back.

US soldiers were told the chemical was harmless, and the soldiers applying the chemicals were among those who received some of the highest exposures.

The VA finally recognized ischemic heart disease as yet another related disease of Agent Orange exposure on October 20, 2011.

Some estimate this illness to affect nearly 200,000 veterans and their families who have waited a long time to receive the care and benefits they deserve.

If you feel that you are entitled to benefits as a Vietnam veteran, you can call the VA’s toll-free help line at 1-800-749-8387 or visit your closest VA hospital.