Since the Occupy Wall Street protests began on September 17, 2011, it rapidly evolved to a wider worldwide movement.

It is a movement which, more than two months later, shows no sign of abating.

Police reaction to the Occupy movement has been somewhat varied. For example, the fact that New York City plain clothed “hipster cop” Rick Lee has been assigned to advise protesters to avoid arrest has come under criticism.

With the Occupy protests dragging on and showing little sign of waning, there is evidence that crowd control weapons are going to be used by officials as a means of dispersing the encampments in various cities across the US and beyond.

Top Secret Writers is offering this article to support the Occupy movement – if you know what weapons you are up against, then you can prepare to defend against them.

These weapons are so technical, sophisticated and expensive, that they would make the $5 million used in police overtime, pretty much pale into insignificance.

Despite wanting to resolve the protests peacefully and calmly, the images circulating throughout the worldwide media show police at the scene of the Occupy protests with protective helmets, riot shields and batons.

These officers are the stereotypical image of police officers in full riot control gear, ready for a fight.

Given the clear escalation of violence on the part of the authorities, it seems clear that the traditional weapons that have been used to disperse crowds and detain rioters for centuries, such as batons and whips, may be the last of the Occupy protestors’ problems.

One new technology that Occupy protestors may soon have to worry about is the Active Denial System (ADS).

This non-lethal, directed energy weapon was developed by the U.S. military in 2010 for the Afghanistan War, and works by firing a high-powered beam of electromagnetic radiation of high-frequency millimetre waves, similar to, as Wikipedia describes, “the way that a microwave oven heats food.”

The ADS millimetre waves “excite the water and fat molecules in the body, instantly heating it and causing intense pain.”

Using radio frequency on humans as a riot control tool and inflicting pain is controversial, and the ADA has naturally attracted its critics.

Whilst some see the development of such an expensive and complicated device for a single purpose as not ‘plausible’, the morality of inflicting pain on humans is the primary concern of riot weapons such as the ADA.

In fact, so intense is the concern about the ADA that it has been likened to torture, and according to Wired Magazine:

“…the Active Denial System has been rejected for fielding in Iraq due to Pentagon fears that it would be regarded as an instrument of torture.”

While it isn’t likely that such a weapon will be used against American protesters, it is conceivable that if things ever get out of hand and the military is called in to assist, that such crowd control weapons may be used.

If such a situation ever occurs, you can protect yourself from the weapon by utilizing metal shields, such as thick sheets of sheet metal, or thick metal trash can lids. You might also consider spraying water into the air between the crowd and the vehicle.

“Countermeasures against the weapon could be quite straightforward – for example covering up the body with thick clothes or carrying a metallic sheet – or even a trash can lid – as a shield or reflector. Also unclear is how the active-denial technology would work in rainy, foggy or sea-spray conditions where the beam’s energy could be absorbed by water in the atmosphere.” 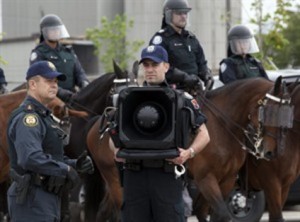 Another ethically dubious riot weapon that Occupy protesters may be faced with is the Sonic Crowd Control Weapon.

The device is manufactured by the American Technology Corporation (ATC) based in San Diego, and essentially emits a deafening tone as a means to incapacitate and disperse a crowd.

In 2009, the device was stationed by San Diego County Sheriff deputies at a town hall forum.  The event attracted several liberal protests groups, voicing their concern over such “extremely dangerous” weapons.

“Long ranging acoustic devices [LRADs] for crowd control can be extremely dangerous. These are used in Iraq to control insurgencies. They can cause serious and lasting harm to humans. We want to know why our Sheriff Dept has this weapon.”

“Even more concerning is having these weapons for public order policing. I can imagine no situation, or am not aware of any situation that’s ever happened in San Diego County or is likely to happen that would justify using these weapons for public order policing to control a crowd. The main effect of having those weapons at public events is to chill people and chill free speech and free association.”

The LRAD can emit sound up to 162dB. The human pain tolerance is limited at about 130dB. Therefore, if faced with such a weapon you will want to have strong ear protection available in order to help defend against such a weapon.

Will the Occupy San Diego protests, which, since it began on October 7, 2011 has seen more than 50 people arrested, see the San Diego Sherrif Department compelled to using its dangerous device?

After all, isn’t that what police control over the Occupy movement appears to be all about, to chill free speech and free association?