The Truth About Iran Protests That The Regime Wants to Hide

Since the Day of Rage has taken place in the Middle East, the region has been a hotbed of political activity.

The protests have caused the ousting of President Ben Ali of Tunisia and Egyptian President Hosni Mubarak. When these protests spilled across the borders into Iran, the current regime attempted everything within its power extinguish the flames of revolution.

However, try as they might, the government has not been able to fully stop the revolutionaries.

Although the public message permitted to the media is that the protests are dwindling, the reality is that the movement is still growing and evolving into an underground network.


Iranian Government Clamps Down on Protesters

During the early part of this year, Many Iranian government officials openly called for the execution of protest leaders an in effort to stop the protests.

This call for execution has deterred many from openly protesting the government.

Also, many of the citizens of Iran cannot afford to protest because the economy is in shambles. The people cannot earn an income or keep their jobs if they are in jail.

Therefore, the protest has moved underground and is being spread across the web via social media.

In an interview with CNN, Iranian Blogger, Peyman Bagheri, he stated, “The opposition movement is alive but underground.”

He went on to say, “Activists are spreading their messages through social networks.”

Not only has the movement gained ground domestically, but it has also gained support from Iranian citizens living outside of the country.

Once again, supporters have the Internet to thank for this international support.

By using social media and online forums, protesters can gain encouragement, support, and even organization.

One such forum can be located at WhyWeProtest.net. The forum is open to all protest movements an in effort to allow protesters to “exchange ideas and information about issues relevant to their interests.”

This one forum alone has thousands of discussions, and thousands more messages all pertaining to the protests in Iran.

Forums such as this act as a hub of information; a way that protesters can disseminate their ideas under the safety net of anonymity.

Because of the freedom that the Internet provides to protesters, the Iranian government is doing its best to censor most web-media outlets. 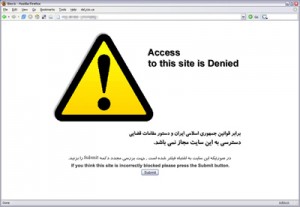 According to yhumanrightsblog.com, Iran is one of 12 countries considered to be “Internet Enemies”.

Early in the protests, back in February 2011, it was estimated that the Iranian government blocked over 5 million websites. A similar Internet blackout occurred in 2009 when the government forced bloggers to remove all pictures of the 2009 protests or face legal action.

As recent as this month, an Iranian student wrote to President Barack Obama, urging him to sanction the Iran government for their human rights violations and fight for the free movement of information throughout the country.

One point the student stated that the president should focus on is that of:

“Speaking out against censorship, Internet filtering, blocking of satellite signals, and the surveillance of Iranian dissidents- and severely punish companies and governments who provide equipment to make it possible.”

Iran would like the world to believe these protests are faltering; that the people have returned quietly their homes.

However, the truth is that although the people have returned to their homes, they’ve turned on their computers.

They are quietly keeping the protests alive and spreading their revolutionary ideas across the web. Unfortunately for the protesters, the Iranian government is already aware of this virtual movement within their borders.

Because of that, there is now a virtual war as the Iranian government does everything within their power to stop the Internet-based Iranian revolution.