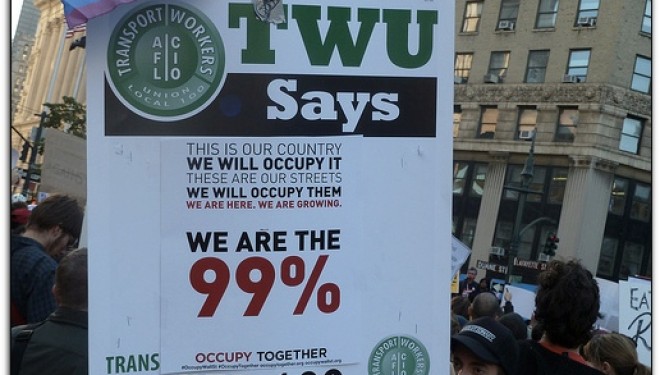 2011 could be described as the year of the protests.

First it was the Arab Spring, which saw a wave of protesters demonstrate for democracy across the Arab world.

Then it was the British riots during the summer of 2011, where looters, arsonists and youths wreaked havoc in Britain’s streets, as the air of political discontent in the UK reached its boiling point.

Finally, it was the ‘Occupy Movement’ that started in October in New York City and has quickly rippled across America and much of Europe, as activists challenge Corporate financial greed and corruption.

However, there was one important American protest that precluded all of the current Occupy protests of today.

That protest took place in February of this year, and received comparatively much less media coverage than the Occupy Wall Street protests, but it may actually have acted as an important catalyst to the Occupy Movement.

Those were the Wisconsin protests, where angry protesters crowded into the Capitol in Madison, disputing job cuts and the weakening of trade unions.

The bulk of the discontent that struck Madison in mid-February was aimed at Republican Scott Walker, who had been governor of Wisconsin for just six weeks.

As Scott Walker explained his plans to delegates, where public workers would pay more for health insurance, pensions and effectively weaken public sector unions by restricting their collective bargaining rights – workers took to the streets.

Walker’s response when pressed about the cuts that “we had no other options” due to a million-dollar deficit, sounded remarkably resonant of David Cameron’s response to harsh austerity measures made in the UK.

As the “99 percent” – to borrow from the slogan of the Occupy Movement – in Wisconsin that had to bear the brunt of those financial cuts in order to tackle and trim official budget problems, the situation fast became a breeding ground for protests. It was a situation that – over the next several months – spread like wildfire throughout the rest of the country.

The Wisconsin protests back in February certainly provided some clues about the impending Occupy Movement that surfaced some seven months later.

In a report published in the New York Times about the Wisconsin protests, the article highlighted tensions and “labor unrest” that were spreading outside of Wisconsin and rising in other states as well.

In particular, the New York Times predicted that similar protests may take place, “…in places where Republican victories in November have altered the political landscape.”

Talking to the New York Times, Kevin Gibbs, a leader of a union in Wisconsin that represents teaching assistants at the University of Wisconsin, said:

“I think Governor Walker is using this financial crisis as an excuse to attacks unions, and if Wisconsin goes, what will be next?”

In the same week back in February, workers demonstrated in Ohio to protest a bill which would limit collective bargaining for state employees in Ohio.

In Indianapolis, teachers also protested against a bill that would limit contract bargaining for teachers’ unions.

These protests, while receiving considerably less media coverage than the Occupy Protests of today, certainly show that labor unrest in the U.S. was beginning to manifest itself long before the Occupy Wall Street protest began in New York City in mid-October.

In the same New York Times article, Kim Anderson, director of government relations for the National Education Association in Washington, said to reporters:

“We view the events in Wisconsin as one of the worse attacks on workers’ rights and their voices in the workplace that we’ve ever seen.”

The Wisconsin protests that took place in February mostly consisted of union leaders and members, who set up temporary offices in the Capitol, where they distributed fliers, planned vigils and sponsored “teach-outs”. 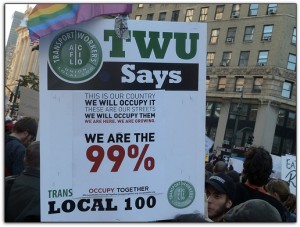 Up until recently, union leaders have been somewhat cautious to embrace the Occupy movement.

More recently, however, union leaders have begun to share enthusiasm with the Occupy protesters, not only joining in with union marches and picket lines across the U.S, but they’ve also showered demonstrators with food, heaters, tents and air mattresses.

“The Occupy movement has changed unions. You’re seeing a lot more unions wanting to be aggressive in the messaging and their activity. You’ll see more unions on the street, wanting to tap into the energy of Occupy Wall Street.”

Whilst trade unions have a long history of picket lines and marches, this new more “boisterous” tactic Stuart Appelbaum mentioned as being propagated from the Occupy movement, was actually becoming established back in February, when a group of union-led protestors stormed the Capitol in Madison, enraged by state plans that would effectively cut their take-home pay by 7 percent.

In other words, it was actually the Wisconsin movement which really sparked the new, more “aggressive” protest tactics, and helped to instigate the drama that has unfolded across the country since October.