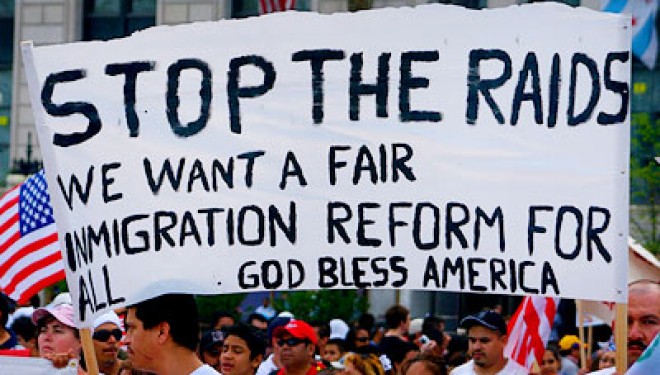 In the wake of Alabama’s new anti-immigration law, there are new reports that agents from the Immigration and Customs Enforcement (ICE) have been making terrorizing raids on north Alabama families that undermine federal efforts to protect the civil rights of the state’s Latino community.

According to a press release issued by the Southern Poverty Law Center (SPLC), a non-profit civil rights organization that is dedicated to fighting hate and bigotry and seeks to implement justice for society’s most vulnerable, agents have allegedly been threatening children and terrorizing families throughout the state.

SPLC has urged the Department of Homeland Security to end the raids.


A Plea for Help to Homeland Security

The SPLC sent a letter urging that the raids be stopped immediately to Homeland Security Secretary Janet Napolitano, after the SPLC had been informed that armed ICE agents had been entering the homes of Latino families living in a mobile park in Collinsville and Fort Payne.

According to witness reports the ICE agents were entering homes without permission and interrogating young children.

In addition to urging that such threatening and forceful raids be stopped, the letter also asked for there to be a formal investigation conducted into the civil rights violations that may have taken place during the raids, which are a result of the state’s anti-immigration law, HB 56.

Prior to the letter, Napolitano had written a statement that the Department of homeland Security would not be assisting Alabama in enforcing the HB 56 law.

“Alabama’s Latino community has already been devastated by HB 56, and many Latinos who have not left the state are living in terror,” Mary Bauer, the SPLC Legal Director wrote in the press release. Bauer continued: 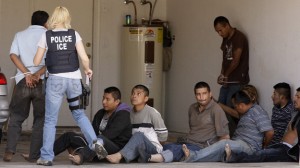 Making illegal raids, threatening to arrest children – who incidentally are U.S. citizens – if they did not reveal their parent’s whereabouts, terrorizing families, and arresting people who happened to be in the vicinity, is blatantly unacceptable behaviour.

It is behavior that marginalizes immigrants further, and does little to tackle the problem of immigration, as Dan Werner, the SPLC’s deputy legal director, stated on the press release:

“These raids are a stark reminder that the failure of our nation to pass comprehensive immigration reform has devastating repercussions that rip apart communities and push immigrants deeper into the shadows.”

If such terrorizing raids are a by-product of the anti-immigrant law, HB 56, and an “avowal” made by several federal agencies, including the departments of Education and Labor, it just goes to show how backward the HB 56 anti-immigration law really is.

The departments of Education and Labor are taking steps to reassure Alabama’s Latino community that the government will be vigilant in protecting their civil rights.

This is not the first time that the state of Alabama and its anti-immigration laws have been scrutinized and criticized, as when the state’s HB 56 was signed into law it was universally condemned by immigrant and civil rights groups as the “harshest anti-immigrant state law to be passed”.

Similar to the HB 56 law’s predecessor, Arizona’s SB 1070, the new law in Alabama also states that it is a criminal offense for immigrants to simply be in Alabama.

Basically, as Johnson Malhotra, advocacy and policy counsel for the ACLU, told Colorlines.com, “The aim [of the HB 56 law] is to make it economically not viable for immigrants to do anything.”

Alabama’s new harsh anti-immigration law, which obviously advocates making illegal raids and interrogating and terrorizing children inside family homes, furthers Alabama’s reputation and stereotype as being a xenophobic state, where racism is bred from the mouths of the lawmakers themselves.