The memo addresses a variety of rules including scheduling visits from family members, visits from minors, celebrities, legislators, nonprofit representatives and members of the media.

But some religious conservatives are angered by a section discussing non-family members, known as “Partners in Care.”

The policy says “No religious items (i.e. Bibles, reading material, and/or artifacts) are allowed to be given away or used during a visit.”


Across the Board Ban on Bibles?

Although positioned by some religious leaders and legislators as an across-the-board Bible ban, Walter Reed’s recently rescinded policy did not prohibit family and friends from bringing religious materials.

“(U.S. soldiers) have given their all for America …the people that come to visit them can’t bring a religious artifact, they can’t bring a Bible, they can’t use them in the services, a priest can’t walk in with the Eucharist and offer communion to a patient who might be on their death bed because it’s prohibited in this memo.”

Interviewed by “Fox and Friends” co-host Steve Doocy, King revealed that he went “straight up in the air” after reading the notice.

While Walter Reed’s guidelines were clearly intended to protect patient privacy and increase religious tolerance, WRNMMC’s home page is currently notifying visitors that the policy was being re-written.

The statement affirmed that “Bibles and other religious materials have always been and will always remain available for patient use.”

The declaration also describes how the hospital has a long-standing policy of respecting many faiths. 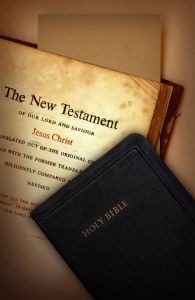 Walter Reed’s biblical brouhaha seems to have started when King, along with the Washington, DC-based Family Research Council, caught wind of the memo.

The FRC was so angered by the Walter Reed notice that it created an online petition urging Walter Reed officials “to permanently end the ban on Bibles and other religious materials at the hospital.”

The FRC is also set to FOIA all records pertaining to the hospital’s new religious ruling.

A letter sent by FRC President Tony Perkins to Chief of Naval Operations Admiral Jonathan Greenert wants the Department of the Navy to produce information related to the “origins and scope,” of the policy along with all letters, notes, memos, e-mails and text messages.

The FRC was so persuasive that actor Chuck Norris felt compelled to share his outrage.

“It’s one thing to watch ‘Merry Christmas’ be omitted from signs in your favorite department store, but quite another to see Bibles withheld from wounded warriors at Walter Reed National Military Medical Center,” Norris wrote in his column on the War Against Religion, Part 1.

Walter Reed’s statement may have just needed a bit of tweaking, but Representative King and Senator Chuck Grassley have made Memogate their new raison d’être.

The duo even met with Walter Reed officials to express their outrage, and King’s website says that he and Senator Grassley recently accepted regrets from Walter Reed staffers.

King is asking to review the hospital’s new piety policy before its official release, and also wants WRNMMC to “identify the individual who is responsible for writing this unconstitutional nonsense.”

Walter Reed spokesperson Sandy Dean says that while the memo may have been imprecise, the hospital is working on a clarification.

“We don’t want there to be any misrepresentation of what we’re trying to say,” said Dean, adding, “We appreciate Congressman King bringing this to our attention. We don’t want our instructions to be ambiguous.” 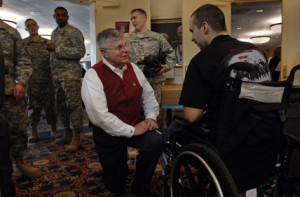 While some evangelical groups are chastising the U.S. military for its lack of religious tolerance, the military has been forced to take steps to reign in proselytizing at military bases, military academies, funerals and hospitals.

Although rarely discussed, non-religious soldiers as well as soldiers of different faiths say that evangelical messaging in the military is pervasive.

The Kansas-based Westboro Church which has been known to preach and protest at military funerals, Unlimited Potential, Inc. provides religious “baseball camps” for military personnel.

In 2005, Jewish and Christian soldiers at the Air Force Academy complained of being heavily proselytized by evangelical officers.

“As Walter Reed rewrites this policy, we humbly suggest that its drafters draw the distinction between supporting wounded warriors and imposing on them while at their most vulnerable,” wrote contributors to the chaplain military blog Chaplains Under Fire.

“The least we can do is give them control over how to practice their faiths — or not…Let the warrior ask for a Bible or a rosary or a Koran or…. and in those cases where injuries prevent warriors from making their views known, check the records. This is basically the policy military chaplains are taught and, from what we saw, it works.”

Whats your view of proselytizing at Walter Reed? Is the memo being misrepresented by evangelist right-wing groups, or is this really an attack against Christian beliefs?