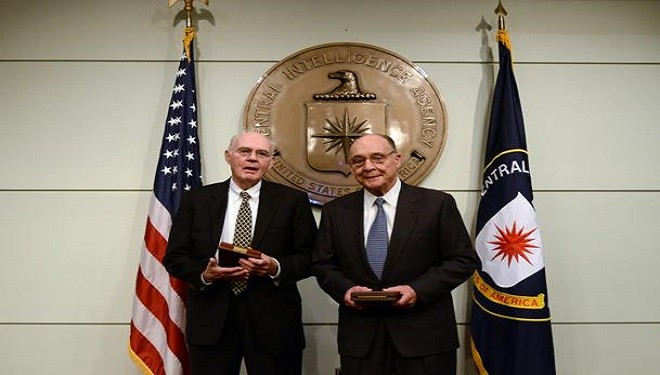 John Downey and Richard Fecteau were young and eager U.S. intelligence neophytes shot down over Communist China in the fall of 1952.

As CIA paramilitary operatives, Downey, 22 and Fecteau, 25 were assigned to help halt the spread of communism during the Korean War by training anti-communist Chinese guerillas.

But things went horribly awry when the duo instead spent 20 years locked away in Beijing prison and the United States denied any knowledge of their mission.

“This story is important as a part of US intelligence history because it demonstrates the risks of operations (and the consequences of operational error), the qualities of character necessary to endure hardship, and the potential damage to reputations through the persistence of false stories about past events,” wrote Nicholas Dujmovic.

According to the CIA’s website, Downey and Fecteau were part of the CIA’s Third Force project, which trained teams of anti-communist Chinese nationals to make contact with guerillas and dissident Chinese generals on the mainland.

It was hoped that the project would curb the spread of communism by destabilizing the Chinese government and diverting Chinese soldiers and supplies from Korea.

Downey and Fecteau’s assignment involved flying from Korea to Manchuria, where a trained team of operatives would signal the plane. Downey and Fecteau were supposed to exfiltrate a courier dropped in two months earlier who claimed to have received valuable documents.

What the two green CIA agents didn’t know was that their ground team had been compromised, the covert operation had been uncovered and the Chinese authorities had set a trap.

Although a smooth mission in theory, it didn’t take long for events to spiral out of control.

The plane was met with gunfire when it descended at the rendezvous site to pick up the courier. The pilots, Robert Snoddy and Norman Schwartz attempted to pull the C47’s nose upward, but the engines cut out and the plane crashed.

While Snoddy and Schwartz perished, Downey and Fecteau escaped with just cuts and bruises. As they watched the plane burn and heard shrieks of joy from Chinese security forces, both Downey and Fecteau told each other that they were “in a hell of a mess.”

By 1953, the CIA presumed Downey and Fecteau were dead.

Their C47 plane had been located, along with body parts and there had been no word from anyone associated with the mission. Letters of condolence were mailed. But the two men were very much alive.

The next few months of captivity involved relentless interrogation by their Chinese captors.

Both men stuck to their cover story of being part of a civilian air transport crew. Unfortunately, this story differed from the U.S. government’s official account that Downey and Fecteau were just two U.S. army soldiers who’d hopped a commercial flight from Korea to Japan that had inadvertently strayed into Chinese airspace.

Separated soon after being apprehended, the two men didn’t see each other until their secret trial in Beijing two years later.

At the November 23, 1954 proceedings, Downey was convicted of being the “chief culprit”, and received a life sentence, while Fecteau was found guilty of being the “assistant chief culprit,” a conviction that carried a 20-year prison term.

The announcement of Downey and Fecteau’s sentences was the CIA’s first realization that their men were still alive.

Downey and Fecteau had more to fear from prolonged psychological abuse than physical punishment.

Years of insults, taunts and threats of torture and execution were common. At one point the men were kept in solitary confinement for six years.

But the two men revealed that the worst punishment was being offered privileges, such as soap or books, only to have them taken away.

Their captors also enjoyed leading the men to believe that an early release was imminent, only to place them back into solitary confinement.

Diplomats Worked Behind the Scenes

While the U.S. couldn’t publicly acknowledge Downey and Fecteau’s association with the CIA, diplomats were working behind the scenes to try and secure their release.

The primary holdup was the U.S. government’s refusal to acknowledge the Communist Chinese government.

Thawed relations between China and the U.S. 20 years later, along with appeals from Downey and Fecteau’s families, eventually helped to secure their release.

Upon learning that Downey and Fecteau had survived, The Agency took steps to right their wrongs by helping the two unacknowledged CIA operatives financially. Both men’s families were properly cared for via clever financial maneuvers arranged by the Office of Personnel staffers, George Cary and Ben DeFelice.

Over the years, Cary and DeFelice made certain that while the two men were imprisoned, they continued to receive increased pay grades as “government employees,” while intermediaries were used to transfer money from The CIA to Downey and Fecteau’s families.

The two men gave some insight into the lessons they learned while imprisoned.

These included never giving up hope, creating a daily routine, and using exercise to ward off depression and boost morale.

Both Downey and Fecteau also discovered that they had the ability to compartmentalize their thoughts in such a way that they each developed a “secret” mental space where they could hide their true feelings.

Although neither man had received the training necessary to withstand periods of long confinement or psychological abuse, a sense of humor and vivid imagination wound up being effective coping strategies that allowed the two hostages to become what Fecteau called an “expert daydreamer.”

Although kept in solitary confinement for the bulk of their imprisonment, Downey and Fecteau were kept close enough to occasionally communicate through coughs, whispers and hidden notes.

It was this enduring compassion and concern for one another that helped them survive the loneliness of prison life.

After their release, Downey and Fecteau kept a low profile. Both men had received numerous requests to speak about their experiences in confinement, but instead seemed to prefer laying low.

The CIA’s website says that both men “have focused their lives on the future, not dwelling on the past.”

Now in their 80s, Downey went on to become a Connecticut family court judge, while Fecteau returned to his alma mater of Boston University, to pursue a career as the assistant athletic director.

The hour-long film was initially created as an internal CIA training film that recounted Downey and Fecteau’s fateful capture and ability to remain steadfast during an extended period of internment.

The production is now available to the public and can be viewed on YouTube.

Depending on who tells the story, Downey and Fecteau’s role in history is controversial.

While some may see the two men as operatives who were sent to destabilize a government, others believe that they are heroes who dedicated their lives to preserving democratic beliefs.

“Their commitment and dedication are a powerful source of inspiration,” CIA spokesman George Little told the Associated Press.