How the Whiskey Rebellion Changed American Politics and Taxes

In 1794, an all-out rebellion took place when farmers from 4 western Pennsylvania counties refused to pay taxes on their favorite tipple, whiskey.

They fought the law and the law won, but the farmers’ defiance, known as the Whiskey Rebellion, permanently changed the political make-up of the United States.

The roots of the rebellion started when Alexander Hamilton realized that the U.S. had racked up staggering debts.

The federal government was $54 million in the red, while the states had accrued a total debt of $24 million. Saddled with this exorbitant financial burden and hoping to build national unity, the nation’s first treasury secretary was determined to balance the books as quickly as possible.

Recognizing that the sale of spirits was a lucrative venture, Hamilton set his sights on taxing distilled beverages. By 1791 the Distilled Spirits Tax was put into effect.


The Importance of Whiskey

Prior to its passage, debates erupted over whether the levy on liquor was fair to the common man. The tax varied from 6-18%, and placed a heavy financial burden on individual farmers.

Opponents to the legislation said it was excessive, and disliked the idea of “internal taxation” compared to taxes on imported or exported goods. Some suggested a tax on ales and other drinks that were popular with city dwellers to make the tax a bit more egalitarian.

Thomas Jefferson, whose Democratic-Republican Party was created to contest virtually anything proposed by Hamilton, opposed the Whiskey Tax on the grounds that it impeded a man’s right to the pursuit of happiness.

Whiskey was the beverage of choice for scrappy country folk living in the wilderness. They enjoyed it at weddings as well as funerals and used it to cure the daily aches and pains of rural life.

Whiskey also served as a unique form of country currency that could be exchanged for much-needed goods and supplies. But passing the tax along to the consumer didn’t work if the whiskey was being used for barter. 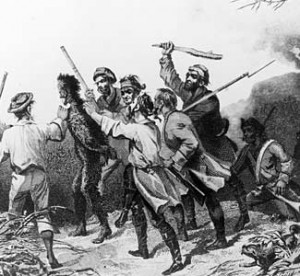 Unfair Enforcement and the Whiskey Rebellion

Ironically, there’s some speculation that the tipple tariff created by Hamilton wasn’t being paid by any U.S. citizen. So why was pressure put on the residents of Pennsylvania?

It all came down to enforcement. There were plenty of people willing to collect levies in Pennsylvania, while citizens in states like Kentucky rarely had a visit from the tax man.

While enforcement was a concern, Hamilton’s tax act passed anyway. What started as simple acts of civil disobedience eventually turned into outbreaks of violence committed by gangs known as “Whiskey Boys.”

By 1794, subpoenas were issued to distillers who’d failed to pay up. The subpoenas required non-compliant farmers to travel to Philadelphia and appear in federal court, a demand that was both difficult and expensive.

The men now considered Federalists like Washington and Hamilton to be government bullies. Effigies were burned, local tax collectors were tarred and feathered and hostilities steadily ramped up.

It was time to end the uprising.

Washington proclaimed the threat of force necessary and used the Militia Law of 1792 to call up 13,000 troops on August 7, 1794. Hundreds of farmers were questioned, and twenty-four men were indicted for high treason.

Since many fled to the farthest regions of the Pennsylvania wilderness, only 10 eventually stood trial. Two were convicted, but eventually received presidential pardons. By October of that year, the rebellion had collapsed.

Was the suppression of the Whiskey Boys a success? It depends on how one looks at history.

Washington and Hamilton’s Federalists were relieved that the rebellion was quelled once the militia showed up. The federal government had shown its strength, and the rabble-rousers had backed down.

But the rebellion created a backlash against the federal government, and Federalist Party sentiment among backwoods folk evaporated faster than alcohol. Many of the Whiskey Boys who felt they’d been strong-armed by federal officials either moved to areas unreachable by tax collectors, or simply switched their political affiliation to Jefferson’s Democratic-Republican party.

The Whiskey Rebellion’s final result? Thomas Jefferson’s administration eventually declared the tax unenforceable and repealed it in 1803 – a move that many U.S. citizens would toast for many years afterwards.