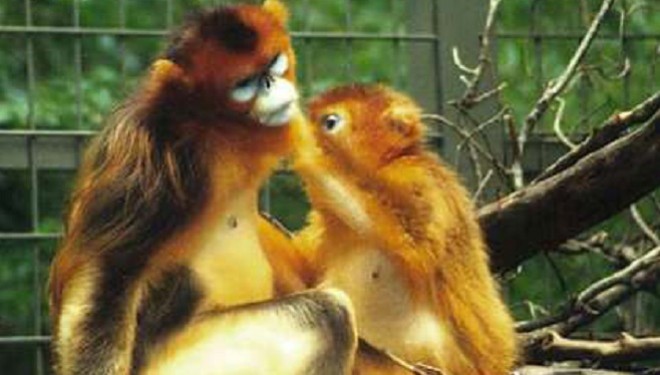 2011 was an exciting year for animal discovery. Unusual frogs, snakes, a bat and even a monkey named after the King of Rock ‘n’ Roll are just a few of the extraordinary animals who are taking the scientific world by storm. Read on to learn more about these amazing creatures.

Nicknamed the “Elvis Monkey”, due to their pompadour-like head of fur, Myanmar’s Snub Nose Monkey has a nose that’s so short, it is believed that rainfall causes the animal to sneeze.

While there are other known snub nose monkeys, the species located in Myanmar has a white beard, ear tufts and an unusually long tail.

While primatologists are just learning of these incredible monkeys, it seems that the locals are familiar with the animals.

Hunters often prey upon the helpless creatures during the rainy season when they lay still and tuck their heads between their knees to protect their noses from the rain.

The only known photo of R. strykeri was taken by hunters who had slaughtered one animal for food. Myanmar’s Snub Nose Monkey is being hunted so aggressively that scientists believe only 300 remain in the wild, and have deemed the animal critically endangered.

Described as being tinier than a penny, Paedophrynedekot and Paedophryneverrucosa are two recently discovered species of tree frog. The two species are the world’s known smallest frogs.

Discovered in Papua, New Guinea, the little arthropod-eaters are so small they only measure 8-9 millimeters long.

Both of the newly-located species are thought to be the most diminutive frogs that scientists are likely to ever discover.

Researchers claim the females can only have 2 eggs, which limits their ability to breed.

The frogs are described as brownish-red in color with brown and black colored triangle markings on their sides along with some very attractive wart-like protrusions. 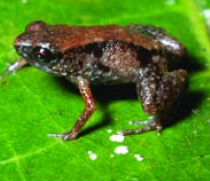 As if flying roaches aren’t frightening enough, scientists discovered a new species of roach that jumps, too.

Known by common names such as the Jumping Cockroach and “Leaproach,” Saltoblattella montistabularis was discovered in Table Mountain National Park, just outside of Cape Town, South Africa.

Leaproaches are only four tenths of an inch long, yet scientists say the creepy creatures can jump 50 times their body length.

Jokingly called “roachhoppers,” Leaproaches thrive in South African grasslands on a diet of what else? Grasshopper excrement.

The last known leaping roach was around in prehistoric times.

In February, The Journal of the American Society of Mammologists reported on the discovery of the Beelzebub Tube Nose Bat.

Located in the tropical forests of Vietnam, there’s nothing at all satanic about this little winged mammal.

According to Hungarian National Museum Department of Zoology representative Gabor Csorba, Murina Beelzebub was given its devilish scientific moniker in honor of the animal’s dark coloring and its overly protective behavior in the wild.

If you’re traveling through China, watch where you step.

Last July, National Geographic News reported on the discovery of the Tiny Pit Viper, a small snake native to the forests in the Maolan National Nature Reserve in Guizhou, China.

Protobothrops maolanensis is a grayish-brown reptile that grows to a maximum length of 2.6 feet.

Similar to pit vipers such as the copperhead, water moccasin and rattlesnake, it’s unknown how toxic the venom of a Tiny Pit Viper may be.

It may be a creature who’s been long gone (by 205 million years), but paleontologists were excited to recently find the Buck-Toothed Evil Spirit Dinosaur, a meat-loving creature found in Ghost Ranch, New Mexico.

Scientists think the dental-challenged dino may be the link between some of the oldest known carnivorous dinosaurs and later meat-eating species.

Four to five feet in length, researchers are most curious about Daemonosaurus chauliodus’ oddly shaped skull and jaw.

2011 proved to be an excellent year for finding new and beautiful reptile species.

Native to the forests of Vietnam and Cambodia, the Ruby-Eyed Green Pit Viper (Cryptelytrops rubeus) was discovered by molecular ecologist Anita Malhotra and colleagues from the U.K.’s Bangor University.

According to Malhotra, very little is known about the animal, its behavior and role in the environment.