1999 was the year in which David Icke broke the conspirahypocrite world big time with his tome “The Biggest Secret”, in which he suggested that ancient bloodlines of Reptilians had intermixed with the earth’s most powerful families.

Icke’s work was based heavily on the rather imaginative writings of a fellow called Zechariah Sitchin.

Sitchin claimed that the ancient Gods of Sumeria were indeed Reptilians. Inspired by the claims, Icke picked up the ball and ran with it.

Eventually, he combined the Anunnaki with the mystic “Aryan” blonde haired, blue eyed aliens of yore.

Yup, these were the very ones that George Adamski allegedly encountered.

Next year, I plan to do a piece on Diana Spencer’s death for TopSecretWriters. Until then, I’ll give you a hint – I doubt she was killed as a result of seeing the Royal Family in lizard form as he has been claiming.

It is next to impossible to trace and define ones “ancient” lineage. The time difference is simply too vast.

The records as far back as the dates being implied are so incomplete, and illiteracy was so wide spread back then, that any form of traceable, written evidence is non-existent.

Even if an affluent “someone” wanted to lay a lineage link to some well-known ancient figure, he would almost certainly be making it up, much like Joseph Farrell.

If you’ve never heard of him, Farrell is almost as bad as Icke.

He too tries to link ancient civilization to modern day. According to Farrell, Fiat currency did not have its origins in 11th century China.

Not on your life – it actually began in ancient Babylon, under a fellow called Nimrod.

Farrell unsuccessfully tried to tie the Rockefellers and Rothschilds into this scheme as well. One piece of evidence he used was that the Rothschild’s had a descendant born in 1922 named Albert Anselm Salomon Nimrod Rothschild.

He conveniently forgets that Nimrod is an unconventional, but not uncommon name in the Semitic tradition.

Farrell also neglects to tell anyone that Albert died in 1938 at the age of 16. Inconvenient facts – but facts nonetheless. 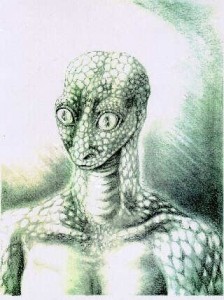 Bringing Jews into the Conspiracy

It is in the discussion about Jews where Icke contributes a great deal of nonsense.

In Ronson’s “David Icke: The Reptiles and the Jews”, while Ronson believes Icke not to be anti-Semitic, he acknowledged that Icke’s belief also created problems with Jewish groups.

His references to 12 foot Lizards have been seen by many as a hidden dig at Jews, and his ringing endorsement of the fake “Protocols of the Learned Elders of Zion” as the real hidden outline of the Illuminati is just plain silly and without any supporting evidence whatsoever. 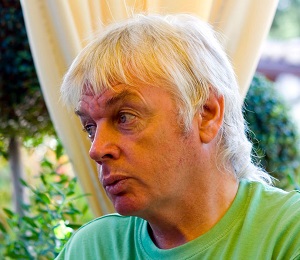 Louis Theroux wrote in his review of Ronson’s excellent work “Them: Adventures with Extremists”, how Icke’s theory and fake documents were nothing more than plagiarism of “The Protocols of the Elders of Zion”.

“Icke’s ‘theory’ is basically ‘The Protocols of the Elders of Zion’ with a new cast and a few script changes. While we are right to be on our guard against paranoid anti-Semitism, we should also be on our guard against the paranoid excesses of anti-anti-Semitism. Not only might it be unfair to Icke, but by implying that he is so dangerous that he has to be censored, the watchdogs are giving a patina of seriousness to ideas that are – let’s face it – very, very silly.”

I fully agree with Theroux and Ronson.

Yet Icke cannot see that by being filmed as he was by Ronson saying stuff like, “…the reptilians prefer eating Aryan babies”, that he was descending not only into a certain level of insanity, but he was also entering into a murky world of race and bogus culture.

For one, the blonde haired, blue-eyed concept of the Aryan people is total and complete gibberish.

Icke could not, and can not see that statements such as these are completely inflammatory, neigh incendiary.

If he ever wants to find what the real Aryan people were doing, Icke should grab an edition of Colin McEvedy’s brilliantly simple and well loved “Atlas of Ancient History” book, look at maps of the area around Iran and go East from there.

That’s where the real Aryans emerged from and went to.

As discussed earlier, conspiravangelists like Icke are so riddled with dubious historical analysis that he has now been adopted by some extremely right wing groups who also suffer from reality issues.

No matter how Icke defends himself, the sad fact is that he has had some of his events and meetings attended and organized by noted racists.

Icke believes that these people have been sent to discredit him in the eyes of the world, and he is genuinely aghast at the popularity he has gained in extreme right wing circles.

However, a person in Icke’s position should have the foresight and knowledge to avoid any and all contact with such compromising characters ,and avoid writing and speaking the kind of gibberish that would attract their kind in the first place.