Prostitution in China – The Elephant in the Room

The Chinese communist government has implemented strike hard campaigns on everything from “overly entertaining (12) TV (3)”, to pornography (4).

The reason is that the party is flexing their muscles is because they choose their successors next year.

With dissatisfaction with many aspects of the party on the rise, the government is more vigilant then ever. The question is, how effective have the communist party strike-hard campaigns been?

What success, if any, have these campaigns had on the behaviour of the people in China?

Just the other day, a glimpse of a horrible aspect of China’s soul became visible when once again (5) (6), a toddler was run over and lie bleeding in the streets as 18 people passed her by (7).

While not an isolated incident, the Chinese leverage such stories to condone their sometimes abusive attitude towards the populace. According to them, incidences such as this prove that China needs to be ruled with an iron hand.

To hear the communist party tell it, they are doing the best they can to guide the citizens of China.


In order to shield the Chinese from negative outside influences, they leverage the “Great Firewall of China” to block websites that are harmful and may cause civil unrest, and they even limit the number of foreign movies that can be shown.

It is their belief that if they control the media and return China to her peaceful roots, the country can once again prosper.

The party claims the battle to save the souls of China to be difficult, but they try their best.

What is the Reality in China?

The other day as I strolled along Dawanglu, I considered the duplicity of China.

On the one hand, an intolerant government that will squelch free speech in one instant and the next, the benevolent father guiding the the Chinese people to on the path of peace and harmony.

While the communist party is keen on cleansing the collective Chinese mind, their methods seem inconsistent.

For instance, the crackdown on Internet pornography may be a rousing success, but it has done nothing to stop the prevalence of prostitution in china – the massage parlors and brothels.

The other day, I was visiting a fellow American who lives less than two miles from Tienanmen, a place of infamy.

By all appearances, his neighborhood is wholesome and is garnished with an abundance of children hustling about as their doting grandparents shepherd them off to English lessons or to play in the communal squares.

At first blush, his housing complex seems like the ideal place to raise a family. The children laugh with youthful exuberance as they play side-by-side octogenarians in the throes of tai qi and other Chinese art forms, designed to prolong their lives.

The reality of China, however, is not what meets the eye, as I was to find out.

“Hello,” an attractive younger woman said to me as I was leaving the quaint mom-and-pop shop with goods piled from floor to ceiling.

“Hello,” I responded, taking in her smart outfit.

“I work there,” she said as she nodded toward the end of the complex. Following her glance, past a car park, I spied the spinning barbers polls embraced by an eerie amber florescence – the calling card of a massage parlor.

Far from hidden, it proclaimed the word “Massage” in both English and Chinese.

Wondering just how well the party’s moral campaign was fairing, I decided to find out more.

“Um, what kind of massage place is it?”

After wrapping her lips around an oversized straw and slurping ravenously at the brackish liquid in the cup she held, her eyes narrowed in thought. She then rebalanced the boxes of noodles, eggs and vegetables she was holding.

As if weighing the trade off of wasting her time or capturing a new client, she exhaled audibly then proceeded to set down her goods.

“It is massage, you know,” she said, and then kneaded imaginary bread with her slight hands.

“Oh, ok it’s massage. Like foot massage?” I said as she bent to retrieve her packages.

Pensively she lowered her voice. “We do more.”

She then nodded again and glanced at the place as a form appeared in the door.

“You bring friends and visit me. I work with my sister in there. We give good price.”

“So its more than foot massage?” I said while kneading the air.

“Of course,” she batted her eyes.

And then as if rehearsed, she began to motion to various parts of her body. “Two hundred kuai for this,” she waved a hand across her chest. And then ran a hand along other parts of her body and face, quoting the cost for each.

Here I was, not fifteen minutes from the heart of the leadership of Mao’s communist China, and a woman was explaining the menu plan of sexual services. Fifteen U$ to be touched, add a five and you feel her above the waist, fifteen more to go lower.

“Aren’t you afraid?” I wondered aloud.

Sixteen? Here is a sixteen year old calling off the price to invade her body as if it were the most common thing in the world.

I began to wonder about a country where a sixteen year old knows the value of every inch of her body to the dollar. While times have changed and sex is more prevalent, one has to wonder about a place where the youth of a child can be monetized in this way.

What kind of country teaches a girl the value of having her body probed, groped and fondled for the price of a meal at the Olive Garden?

“What about your family? I bet they are worried for you, aren’t they?”

She glanced to her left and nodded at her work once more. “That is my aunt.”

Again I followed her gaze. My eyes falling upon a squat women with square proportions. A stern grimace graced her lips as she narrowed her eyes in contempt. “Why is she angry?”

“She runs the massage place. She protects us, but is very strict. She does not like me to waste time. Too many customers to meet. I must hurry.”

Nodding at her, I watched as she bent to retrieve the last of what was to become a family meal of sorts. As if on cue, the woman who was her aunt began to shriek in some unintelligible dialect which I could not discern, but could only assume that she was commanding the girl back to her job.

After all, there was money to be made. 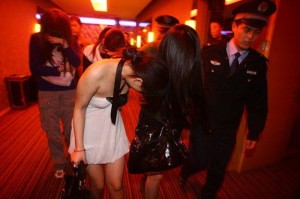 After declining the massage, I headed off and wondered about this country.

Although prostitution is far from rare here, it was disturbing nonetheless. The brazen nature of the brothels and their workers seems to mock the illegal nature of the act.

The massage parlor by the small stores is nothing more than a symbol of the new, the reality of China. In a three block radius of the home of my friend, I encountered no less than half a dozen such places.

In what can only be seen as a Chinese reality, toddlers and business people rush by as if unaware, while the women buried deep beneath the maws of brothels perch atop gaudy sofas and tease their hair or munch on seeds, then pile the husks on the heap table in front of them.

At times, the bolder ones will call out, “Handsome foreigner come here,” as they grin.

And more often than not, the car of some communist official, easily identifiable by their license plates, are parked in front of such places.

Perhaps these honorable men and women are giving those’ pleasure workers’ a dressing down, but I have my doubts.

From what I have been told, its often these same party officials, in conjunction with the local police force, that run the houses of prostitution throughout China.

I meandered off and thought about the latest news, the crackdowns and what I had just seen. I was once told that almost all hotels in China have massage parlors. It was a service that the clientele expected.

I then wondered about the communist party and their role, be it implicit or explicit.

While it looks good to round up illicit pornography, one has to wonder about the net impact on society. One has to wonder whether the rampant use of both men and women in houses of prostitution is not more deleterious to the health of society than adult videos are?

The error of one moment becomes the sorrow of a whole life.
– Chinese proverb

I recently visited my friends neighborhood and found all of the massage parlors to be shut down.

When I inquired about this, my friend informed me that it is a usual occurrence during this time of year. However, in a few months, the Chinese Lunar New Year will be upon us, and everyone will be looking to make extra cash.

The impact of this, according to friends, is a “shakedown” of the massage parlors by the local police and party officials.

In the name of cleaning up the streets, they shutter these massage parlors, which have been operation with impunity for the rest of the year, all in order to exact a pound of flesh, i.e. higher bribes.

Upon visiting my friend a while later, I have found that all of the massage houses are once again open. They have apparently paid enough “skin money” to allow full operation into the next year.

References:
(1) In order to show their sincerity at cleaning up China, the party has gone so far as to limit TV shows that are “emotionally unhealthy”. In the forthcoming months, shows that are overly entertaining will be banned and or limited.
(2) QuickTVShows
(3) China’s Ban on Overly Entertaining TV
(4) Deccan Herald
(5) A similar event occurred last year but the press coverage was limited. In that instance, a man in a BMW ran over a child four times and no one helped nor stopped the man. (see below)
(6) Asia One
(7) The Mirror
(8) Chinese money is called “Qian” pronounced ‘chen’, “kuai” pronounced ‘kwi’, and RMB.
(9) Sixteen is the age of consent in China. Her attitude was that being so young, the police would take it easy on her.
(10) Tibet Sun
(11) Shanghaiist
(12) China Smack