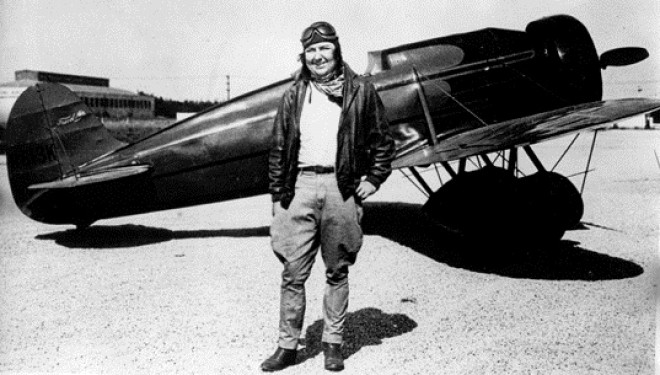 Pancho Barnes was an unconventional character that had a big effect on aviation and aviators during some of the most dynamic years in aviation history.

Though living through pain, prejudice, and the Great Depression, she maintained a love of life.

Pancho was a very respected pilot in the Golden Age of Flight: an era that began with Charles Lindbergh’s 1927 flight across the Atlantic Ocean and ended twenty years later in Long Beach Harbor with Howard Hughes’ giant flying boat, the “Spruce Goose,” pulling itself out of the water.

Soloing after only six hours of instruction, she was among the first female pilots to be licensed in the United States, and became a renowned stunt pilot who performed in major silent- and sound films, including Howard Hughes’ ambitious Hell’s Angels in 1930.

This came after she had crashed at a previous Women’s Air Derby.

Pancho knew a lot of people in Hollywood, including George Hurrell who went on to become the legendary head of the portrait department of MGM Studios.

Hurrell started his career in Hollywood after taking the photo Barnes used for her pilots license.

The Great Depression hit, and Pancho lost most of her money. She sold her apartment and bought 180 acres of land in the Mojave Desert in 1935.

This would become a place of legend among aviators.

“When you have a choice, choose happy!”

Eventually, Pancho founded the “Happy Bottom Riding Club” at what is now better known as Edwards Air Force Base.

Members could land at her FAA approved airport, watch rodeos at her championship rodeo grounds, dance in her dance hall, have drinks at her bar, eat a great steak in her restaurant, ride horses, swim in her large circular pool, and stay at her hotel.

At its height, there were over 9,000 Happy Bottom Club members worldwide, including heads of state, actors, actresses, high-ranking military, famous writers and artists. All visited her bar and restaurant.

It seems to have been a place filled with great fun, and presided over by Pancho herself, who could dispense everything from discussions on airplane technology to good time philosophy like her famous statement, “When you have a choice, choose happy!”