US Advanced Hypersonic Weapon Can Reach Anywhere Within Two Hours

In November, the US military unveiled a hypersonic flying missile that travels five times the speed of sound, and can strike a target anywhere in the world within two hours.

For the last several weeks, defense analysts and national leaders from around the world have been debating exactly what the new U.S. military capability means for world security.

The Advanced Hypersonic Weapon (AHW) was successfully tested on Nov 17th, when it was launched off the Pentagon’s Pacific Missile Range Facility in Hawaii.

In less than half an hour, the weapon reached its destination at Kwajalein Atoll, approximately 3,700 kilometres away.

This was the first time the AHW has been fully tested, and is part of a Conventional Prompt Global Strike capability that is under development by the US Army.

According to ABC News, the Department of Defense had described the missile as a “first-of-its-kind glide vehicle”.

The weapon uses a three-stage booster system that launches the glider, allowing it to literally slice through the air. The new long-range capability will mean that the US no longer has to rely on stationing missiles in foreign countries.

The Pentagon has not released any information on exactly how much faster the AHW can fly compared to conventional missiles. However, referring to the weapon as a “hypersonic” missile implies that it is capable of exceeding at least Mach 5, which is five times the speed of sound.

According to defense analysts at Global Security.org, the aim of the project is to be able to strike a target of 6,000 km away in just 35 minutes, with an accuracy of 10 metres.

Writers at Global Security.org wrote that the AHW is one of several alternative weapons that the Pentagon is considering in order to allow conventional weapons to strike, “fleeting targets around the globe faster than today’s munitions.”

One of the biggest advantages of the Advanced Hypersonic Weapon is that not only will it develop a “prompt global strike,” but it also means that such a weapon can be aimed at specific targets, without the need to launch from third-party nations. 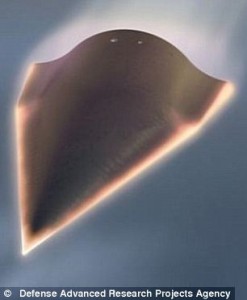 No Images Available of the Weapon

A Defense spokesperson did say that due to the project’s sensitivity, no images of the weapon will be made public.

That has not stopped speculation about what the AHW looks like from circulating around the world, with Great Britain’s Daily Mail claiming that the missile could look similar to a Falcon HTV-2.

A statement issued by the Department of Defense and posted on its website reviewed about the aims of the recent testing of the AHW:

“The objective of the test was to collect on hypersonic boost-glide technologies and test range performance for long-range atmospheric flight. Mission emphasis is aerodynamics; navigation, guidance, and control; and thermal protection technologies.”

Earlier this year, the Pentagon tested another hypersonic glider, known as the HTV-2, which is capable of flying at a speed of 16,776 miles per hour. However, the test was ultimately a failure.

The Congressional Research Program reported that the Pentagon has invested a total of $239.9 million this year alone on its Global Strike Program, a figure that includes $69 million on the most recent testing of the AHW.

This “new generation” of high speed non-nuclear weapons, intended to strike anywhere on Earth within an hour, have alarmed China and Russia and complicated nuclear arms reduction negotiations.

By investing so heavily in these new high-speed weapons, the White House has made it clear that it is intent on developing such a global attack capability.

Daniel Goure, a defense analyst at the Lexington Institute in Virginia, told reporters that the capability is core to America’s defense strategy:

“The ability to attack a wide range of targets at intercontinental range, promptly and without resort to nuclear weapons, is of central importance to the US national security.”

Brain Implants Control Rats and May One Day Treat Humans   0