Are UK Horse Mutilations Satanic Cults or Something Worse? 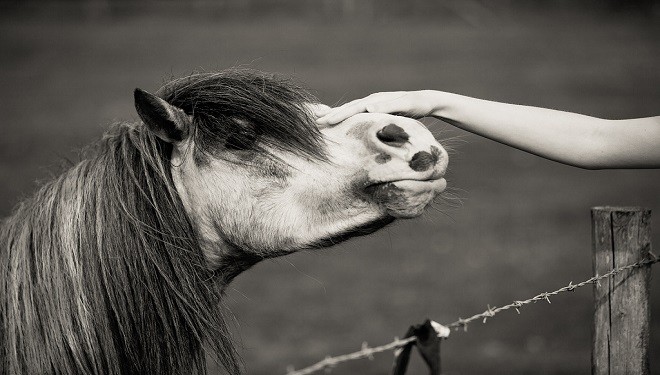 Things are disturbingly unsettled in the world of horses at present, with horrific horse mutilations happening in the UK.

Oddly enough, in parallel with those mutilations has been the spread of a neurological form of equine herpesvirus type 1 (EHV-1), currently making its way across the western United States and threatening horse populations across the world.

Speculation into what is causing the disturbing deaths of so many horses is inevitably surfacing, with animal lovers making their feelings of horror known on the likes of Twitter and Facebook.

The most recent appalling case of horse mutilation occurred in the English south-western county of Devon.

A two-year-old horse, called Eric, suffered severe injuries to its head and body at its home in Devon, in what Maureen Rolls, of South West Equine Protection told the BBC, “…was the worst case of horse mutilation she had seen in 30 years.” (1)


Not the First Horse Mutilation in the UK

This latest attack on a horse in the UK follows a similar assault on a pony in Carmarthenshire on 5 January this year, which saw the horse suffer from similar injuries as Erik.

While the police of both constabularies are following lines of inquiry and trying to identify the offender, the distraught owner of Erik is offering a £2000 reward for anyone who may have information that could lead to the capture of the attacker or attackers.

So far no information regarding a possible offender has been reported.

One popular theory about who is committing these dreadful horse mutilations in the UK that is circulating on Internet forums is that they are being carried out by a satanic cult.

Speculation that the horse killings could be linked to a ritualistic animal sacrifices by a satanic cult has been prompted by the fact that the attack on Eric in Devon happened shortly after St. Winebald Day – a poignant date on the satanic calendar.

Talking to the BBC, Inspector Chris Stickland, from the Devon and Cornwall Police, said that the satanic cult link was a “strong possibility”, and that it is “Obviously one line we’re going to pursue”, although he insisted that the police also had other leads.

Another very real possibility behind the horse mutations currently plaguing the horse world at present is that they could be part of a top secret, highly classified government testing program.

Governments Fear the Spread of EHV-1

The spread of the EHV-1, which began at a horse show on Ogden, Utah in April and May of last year and quickly led to subsequent outbreaks of the disease across the western US and Canada, naturally increased the focus of equine infectious disease research around the world.

According to the Gluck Equine Research Center Department of Veterinary Science in the US, over the past decade there has been an “unexpected increase in equine herpesvirus neurologic disease incidence.”

The US Gluck Center also informs readers that there were a significant number of EHV-1 outbreaks also reported in Europe last year, with some of the infected horses exhibiting respiratory and neurological signs.

Speaking about the greater amount of equine herpesvirus research required, Udeni Balasuriya, virology professor at the Gluck Center, said on the organisation’s website:

“The development of neurological disease in particular horses may be influenced by a variety of virus, host, and environmental factors. More basic research is needed to understand the molecular basis of the neurological form of equine herpesvirus-1 infection. There should be more collaborative research between scientists who are working on EHV-1 around the world.”

A Coincidence, or a Link?

Could the outbreak and spread of EHV-1 in the US, which has now spread to Europe, and the call for more collaborative research worldwide have spooked and pressured the UK government?

Could the two horse mutilations to date actually be part of a top secret – or above top secret – government testing program?

Although very little has been reported about the possibility of a government explanation behind the two recent horse mutilation cases in the UK, previous connections between animal mutilation and government/military experimentation has been made conclusively in the past.

In the article, Oliphant speculates whether the phenomenon of cattle mutilation was the result of covert government research into emerging cattle diseases in the 1970s, in order to determine whether or not they could be transmitted to humans.

According to Wikipedia, in his book, Oliphant supports his hypothesis of US government and military-supported animal mutilations by citing the Reston ebolavirus case, whereby plain-clothed military officers entered into an animal research facility in Reston, Virginia – driving unmarked cars – to secretly retrieve and destroy the animals there that were infected with a highly contagious disease.

A Long History of Government Involvement

Reiterating Oliphant’s claims is Colm Kelleher, a research scientist and author, who has investigated animal mutilations himself as part of his work with NIDS (National Institute for Discovery Science) – a now-defunct private research organization.

According to Wikipedia, Colm insists that the most probable explanation behind the animal mutilations that occurred in the US in the early 2000s, was a clandestine US Government effort to track the spread of mad cow disease.

Strange animal mutilations have been connected to government activity as far back as 1979, when three police officers from Dulce, New Mexico, reported that a mysterious aircraft that looked like a US military helicopter was observed hovering around the site where 16 cows had been mutilated.

As the past has shown, the idea that there could be government involvement in the two recent horse mutilations in the UK isn’t as paranoid or far-fetched as the idea may initially be perceived.

In fact, it may be in the government’s best interest if both the horse owners and the investigators become convinced that the mutilations were the work of some satanic cult, since such a believe would keep everyone as far away from the truth as possible.

While it is possible that a satanic cult is responsible for the gruesome act, the timing of these two horrific horse mutilations in Great Britain with the recent spread of EHV-1 must also be taken into account. It may be more than mere coincidence.