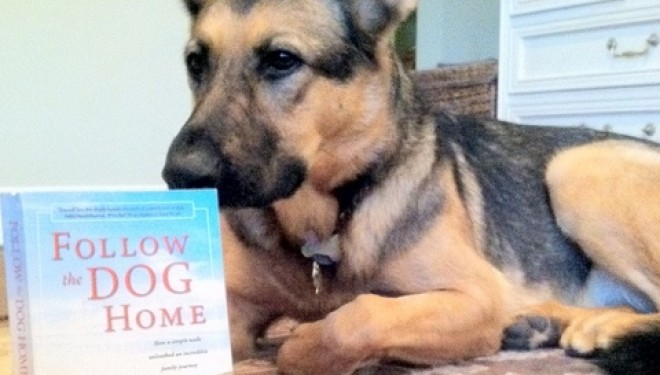 Dogs have been domesticated for more than 15,000 years, and, according to a book titled “Genetic Evidence for an East Asian origin of domestic dogs,” dogs may have been the first animal to become pets.

Asides making great companions, dogs have an ultra-sensitive sense of smell, with more than 220 million olfactory receptors in its nose. A dog’s sense of smell is said to be a thousand times more sensitive than that of humans.

Dogs are also adept at locating everything from survivors trapped in the rubble of an earthquake, to forensic cadaver material.

A new book that has been co-written by a family for whom dogs have always played a central role, tells a tale that goes beyond the those facts about dogs, and dives into more mythical realms – suggesting that dogs may actually have some kind of sixth sense.


Do Dogs Have a Sixth Sense?

We’ve all heard stories about dogs getting lost and somehow, months later, showing up on their owner’s doorstep, but how can you explain a dog leading a man to his father’s childhood home from 70 years earlier?

What has been dubbed as a story that’s stranger than fiction, the book titled, “Follow the Dog Home: How a Simple Walk Unleashed an Incredible Family History,” recalls the story about when one of the book’s authors, Kevin Walsh, makes an extraordinary discovery while out walking his dog, Beverly.

The Walsh family had moved to Wellesley, Massachusetts because of Kevin Walsh’s job with a major television sports network.

While Kevin was out walking the family’s German Shepherd, Beverley, she kept veering toward a particular house, which Kevin admits he felt strangely familiar with.

Kevin eventually went back through his family records and dug out a photograph of his father as a baby, sitting on the porch of the very same house, complete with their first family dog, Dee Dee!

A Paranormal Book for Dog Lovers

This astonishing story is just one of the tales that make up the “Follow the Dog Home” book.

With all three authors recalling moving stories about the 17 dogs that have been a part of their family’s legacy for more than 70 years, the book promises its fair share of emotion.

Generally speaking, animal lovers usually have an insatiable affection for hearing such ‘feel good’ stories about animal bravery, courage and their often uncanny ‘sixth-sense’ abilities. Combining this with an intriguing exploration of family history, the book promises to be a compelling and interesting read.

It is believable that dogs could have this sort of “sixth sense”. I always remember watching a particular video from the Haiti Earthquake of a dog bolting from an office building only seconds before the tremor struck and devastated the building itself – another eerie example of a dog possessing unexplainable ‘intuition’.

As for the scientific evidence that could account for Beverley’s intuitive behaviour – could it be possible that Beverley’s fixation on her family’s home from 70 years prior could have something to do with a dog’s extremely well designed sensory perceptions?

Although, let’s be honest, a family’s “smell” being preserved in a house for over 70 years isn’t really that likely.

Regardless of the explanation, dogs, with their extraordinary senses and formidable instincts of companionship towards humans, never fail to provide people with remarkable stories.

In this sense, the Walsh family’s book that’s is due out on February 1, 2012, should prove to be an interesting read for anyone interested in dogs, genealogy, or the paranormal.

You can get your copy of Follow the Dog Home right now.